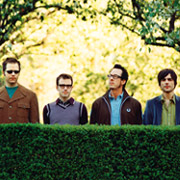 Did you know that back in the early '90s, when they were just another up-and-coming act on L.A.'s Sunset Strip, Weezer were actually fronted by a Canadian hottie and went by the name of "Weeze"?

You didn't? Well that's probably because it's not true. But that didn't stop director Marc Webb from taking that idea and running with it in the video for the band's new single, "Perfect Situation."

"We are exploring the history of Weezer. It's the Weezer prequel, if you will, and we're going to document the early days of the band," he explained. "A lot of people don't know this, but before Weezer was Weezer, they were a band called Weeze. Rivers [Cuomo] was just a roadie for the band, and they had a totally hot female singer."

But just who will be playing that "totally hot" frontwoman? Well Webb wasn't about to tell, but according to Weezer's label, Geffen Records, the role will be played by none other than "24" star Elisha Cuthbert, who might not have the musical chops for the role, but, well, is plenty hot.

"Basically, Weeze was fronted by this totally badass rocker chick, who stole the spotlight from the other members of the band," Webb explained. "Meanwhile Rivers just loads the gear, tunes the guitars and watches from the side of the stage. And he also takes care of Weeze's lead singer when she's partied a bit too hard."

And it's that partying — which Webb described as "Axl Rose crazy ... bashing in TV sets, drinking Jim Beam and cough syrup" — coupled with Cuthbert's character's bad attitude and rock-star temperament that make her an absolute nightmare to deal with. After one night of particularly hard drinking, she throws a diva-esque tantrum and locks herself in her dressing room, refusing to go onstage. And in a tight spot, Weeze ask their roadie to step to the mic ... and Weezer are formed.

"The video is there to capture that magic moment when Weeze becomes Weezer," Webb said. "And we see Rivers step to the mic and slowly win the fans over."

And those fans will be played by, well, actual fans. Much like the band's earlier "Beverly Hills" clip (see "Weezer Party At Playboy Mansion For 'Beverly Hills' Video"), Weezer put out an open casting call on Weezer.com, asking loyal fans to come out and fill the frame with their own brand of somewhat geeky enthusiasm.

"We're filling [Hollywood club Avalon] with Weezer fans, and we're going to mess around with them," Webb said. "We wanted to make a video that's in the spirit of those old Spike Jonze Weezer videos, like 'Buddy Holly' or 'The Sweater Song.' Those great, youthful videos that were so high-concept and so clever. We wanted to play around with what a video is and can be."