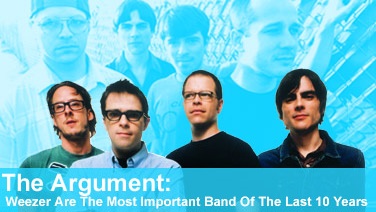 The opinions expressed in the argument below are solely those of the writer and do not necessarily reflect those of MTV News. If you agree, disagree or want to share your thoughts with someone besides your blog, let us know.

Ten years ago today — on October 25, 1994 — Weezer played a show at Graham's, a now-defunct club in Phoenix. They opened for Live, who at the time were probably the biggest rock band in the country and are ironically now only slightly less defunct than Graham's.

That week, Weezer's self-titled debut album (affectionately known as The Blue Album) had been out for nearly six months and was languishing at #84 on the Billboard albums chart. But within a few weeks, spurred by the success of the single "Undone - The Sweater Song," the album would take off, going on to sell more than 3 million copies in the U.S. and send a whole lot of kids racing to the nearest Guitar Center.

Why? Because The Blue Album was much more than just a nice album filled with plucky, crunchy indie pop. It introduced a nation of young rock fans — particularly those between the ages of 12 and 14 — to something they'd never heard before. Much like Green Day were the first punk band that many kids heard, Weezer were an introductory course in all things indie and emo.

For these young fans, The Blue Album opened a wormhole into an indie universe where bands wrote honest, intelligent music and toured the country in vans. And then, with their second album, 1996's Pinkerton, Weezer took those wide-eyed kids and shoved them face-first into a whole new genre of music: emo. Rivers Cuomo's pensive and personal lyrics, sweet melodies and deceptively simple guitarwork inspired countless kids to put pen to paper or grab a guitar.

And because of all that, Weezer are the most important band of the past 10 years.

Let me clarify the argument by saying that Weezer were by no means the first modern "indie band"; they weren't even on an indie label. Nor were they the first "emo" act (that was probably Washington, D.C.'s Rites of Spring). But they did perfect both genres — and made them both accessible to the masses.

When The Blue Album peaked at #16 on the Billboard chart back in January 1995, the #1 album in the country was Garth Brooks' Hits. Other artists in the Top 10 included the Eagles, Boyz II Men and TLC. Looking at the entire chart, there's not a single act that looked or sounded like Weezer (in contrast to a chart from today, which is loaded with Weez-biting acts like Taking Back Sunday, Hoobastank and, yeah, even the newly sensitive Good Charlotte). They were four nice, dorky boys in thrift-store T-shirts and thick specs — who were selling 50,000 albums a week.

The album's success surprised the band as much as anyone. "When The Blue Album was about to come out," former Weezer bassist Matt Sharp recalled recently, "I remember Rivers and I sitting down and writing out a list of all the people we thought would buy the album. Friends, family, people like that. I think we came up with a list of 100 people. So when it ended up selling as well as it did, it was quite a shock to us all."

Cuomo's songs were at turns bitter and sweet, but retained enough quirk to make them accessible. Sharp's slightly goofy backing vocals added just enough sweetness to make Weezer's tunes innocuous and radio-friendly. They made videos — directed by a then-unknown skate-punk photographer named Spike Jonze — in which they frolicked with golden retrievers and jammed on the set of "Happy Days." They were geeks, and proud of it (in fact, they had a hand in ushering in the era of Geek Chic, a mid-'90s phenomenon that probably peaked when models actually strutted on runways wearing thick-framed glasses and plaid cardigan sweaters).

And it was this geekiness, combined with the accessibility of The Blue Album — which has little profanity and few angry moments — that made Weezer nonthreatening and appealing to younger listeners, and also what helped to develop such a strong bond between the band and its fans. Cuomo was seen as something they all could be: a scrawny kid in thick glasses who became a bona-fide rock star. It was a strange mixture of loyalty and dependence (basically the same relationship fans share today with bands like Dashboard Confessional, Taking Back Sunday, etc.).

But Weezer also had a detached cool about them, a defiantly underdog attitude that manifested itself in Cuomo's silence during interviews and onstage. So fans felt that they were part of some sort of "underground" joke, some small secret that only other fans were privy to. And they actively looked for more bands that fit this mold, snapping up albums by acts like the Flaming Lips, Nada Surf and Pavement. And lo, the seeds of a new Alternative Nation were spread.

Of course, it wasn't just kids who were listening. "That record, it's just undeniable," said Jim Adkins, lead singer of Jimmy Eat World, who formed in Arizona the same year The Blue Album was released. "It's solid in every way you could want a rock album to be. We were listening to The Blue Album on our first tour in California — our first out-of-state shows. We were just getting indoctrinated into the whole 'playing in a band' thing."

There are a few moments on The Blue Album that pointed toward where Weezer were heading next: The bent chords and Cuomo's yelps on "Say It Ain't So," the gradually building guitars of the eight-minute "Only in Dreams." Those are the first instances of naked emotion and angular guitarwork in the band's career, and they're harbingers of their pending achievement.

But that achievement began under dubious circumstances. In late '95, Cuomo made the highly unusual decision to put his rock-star career on hiatus and return to college, enrolling at Harvard. During the winter of 1996, he was living alone and was basically bedridden due to leg surgery he'd undergone earlier in the year. By all accounts, Cuomo wrote most of what would become Pinkerton in a veritable bubble, isolated from the outside world and, more importantly, from TV and the radio. He felt increasingly detached and lonely, and it showed in the album.

And Pinkerton was the first emo record most of them had ever heard. Kids who had been learning guitar chords since The Blue Album were now drawn to Cuomo's confessional lyrics, which helped to shape a generation of songwriters (is it any wonder that Saves the Day's Chris Conley, Thursday's Geoff Rickly, the Used's Bert McCracken are all about the same age?). And while Pinkerton has yet to approach the commercial success of The Blue Album — it wasn't certified gold until almost five years after its release — it's seen as a touchstone album, a testament to grand ambition. It's an underdog of an album, an overlooked masterpiece, an indie version of the Beastie Boys' Paul's Boutique — and, of course, its comparative commercial failure only makes it more appealing to underdog-boosting emo kids.

The true impact of Pinkerton didn't manifest itself until recently, as fans of the album grew older and formed bands of their own. Look at the success of emo-punk labels like Drive-Thru or Victory Records, the top-10 Billboard debuts of emo-punk acts like Dashboard Confessional, the Used and Taking Back Sunday, not to mention the hundreds of bands currently aping Cuomo's keening yelp and blustery power chords. Emo-punk is the most active, successful and vibrant strain of rock and roll today, and all of it was influenced by Weezer.

There are countless bands that have made their mark over the past 10 years, and undoubtedly fans will shout their names loudly in disagreement to this argument. Green Day? Just following in the footsteps of an already established musical genre (East Bay punk). The Smashing Pumpkins? Destroyed by their own self-indulgences. Radiohead? Even they haven't topped the space-rock grandeur of OK Computer. Nirvana ushered in the 1990s, kicking and screaming, and you could argue that every band that has risen to prominence since has essentially been a son of Nirvana.

Well, none of Weezer's sibling sons of Nirvana have been as influential as them. And for that, and because they've spawned a whole new generation of bands that are doing exactly what they were doing a decade ago, we should give Weezer the respect they deserve.

Granted, they've stumbled a bit in recent years — The Green Album and Maladroit were disappointments — but their past achievements afford them a bit of leeway. And we're holding out hope that the band's new album, due in 2005, will continue to push boundaries for another 10 years. Like Cuomo sings on Pinkerton's "Falling for You," he just wants to "get fat and old with you."

And your kids, too.