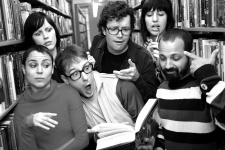 Are you now or have you ever been a friend of P? If so, not only does that mean you're automatically friends with me, it also reasons to figure that you might be interested that the newly reformed Rentals are headed out on a North American tour, starting tomorrow night in San Francisco.

As previously reported, former Weezer bassist Matt Sharp is taking his synth pop project out of the mothballs, on to the road, and into the studio for an upcoming third album. While the band's website muses that the album is "likely to be completed and ready for release in 2007," the tour dates are ready for the here and now.

Don't let the website's awkward HTML-for-beginners appearance scare you off, either; besides hosting the official video clip-heavy archive of a band that released only two albums, the website also offers a Rentals remix of Tegan and Sara's "Walking with a Ghost." First the White Stripes cover the song and now the Rentals remix it, proving that ghosts have officially replaced zombies as this season's official "it" ghoul.


* with Ozma
$ with the Salteens