From Weezerpedia
(Redirected from Rentals)
Jump to: navigation, search

The Rentals are a rock band fronted by Matt Sharp, former bass player for Weezer. Sharp is the band's only constant member.

Matt Sharp's concept for The Rentals began before his involvement in Weezer. The project, initially named That's Incredible! by producer Tom Grimley, was heavily influenced by late 70s/early 80s new wave, punk, and synth pop, particularly musician Gary Numan and his project Tubeway Army. Matt Sharp has cited the band that dog. as an inspiration for the band's formation.[1]. Sharp initially - and only very briefly - used an ironic fictional backstory to market the band. As described in an 1995 Billboard interview, the band's press materials identified each member of the Rentals as "the sons and daughters of American embassy employees in Prague."[2] The interview further paraphrases the backstory:

Sharp introduced this persona as early as September of 1995, when he accepted an MTV Video Award for "Buddy Holly" in character[3]. Sharp dropped this backstory the next month, however, telling the Toronto Sun that he "didn't have the energy for it... I think people get really offended when they don't understand your humor, and then you have to do interview after interview with all these people that are really put off by you because you're being sarcastic."[4].

The Rentals are best known for their 1995 hit single, "Friends of P.". The group released two albums during their initial period of activity, 1995's Return of the Rentals and 1999's Seven More Minutes, on Maverick Records. 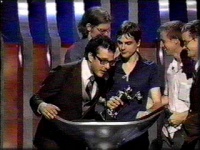 Matt Sharp during Weezer's acceptance speech at the 1995 MTV Video Awards. Sharp first made use of the Rentals' fictional Czechoslovakian backstory in this speech.
During the writing of Seven More Minutes, Matt spent time touring with British musicians including Blur and Ash. Musicians from Elastica, Blur, and Ash appeared on several tracks on Seven More Minutes. Matt has gone on to collaborate with Blur frontman Damon Albarn on several occasions. Along with Blur drummer Dave Rowntree, they recorded a cover of Gary Numan's "We Have a Technical" for a tribute album, and Albarn appeared with the Rentals on French television performing "Friends of P.".

The band quietly dissolved following the world tour for their second album but, in 2005, Sharp reformed the band with intentions of touring and recording a new record. The band went on tour with Ozma in 2006 and, in 2007, The Rentals released The Last Little Life EP under the label Boompa, containing three new tracks and a revamped version of "Sweetness and Tenderness", a track from their debut album. The band also toured with Goldenboy and Copeland.

The band released the single "Colorado", originally performed live as part of Sharp's solo project, in 2007. In 2009, the band announced a new self-produced project: Songs About Time. The first of three mini albums, titled The Story of A Thousand Season's Past, was released on April 7, 2009, with the second chapter (It's Time to Come Home) and third chapter (The Future) released in July and October, respectively. The fourth, all-instrumental chapter, titled Tokyo Blues, was later released as a standalone album in 2011 titled Resilience: A Benefit Album for the Relief Effort in Japan.

In December of 2013, Matt Sharp announced that the band had signed with the label Polyvinyl and would release a new album in 2014.[5] The album, titled Lost in Alphaville, was released on August 25, 2014. The Rentals subsequently went on tour with a lineup including members of the band Radiation City, who also opened for the band.

In 2017, Matt Sharp began tweeting about the next Rentals record, and unveiled a new song titled "Elon Musk is Making Me Sad" on October 5, 2017. As of October 20, 2018 the Rentals' fourth album, mixed by Pinkerton engineer Dave Fridmann, was finished.[6] Matt Sharp announced on his Instagram account that the band was finished recording and mixing the album and would next be heading into the production phase. The album, titled Q36, was finally announced on November 5, 2019 alongside the new single "Spaceships".

This list contains all studio and touring members of the Rentals, both former and current.