Rivers Cuomo organized a release party at Fingerprints Music in Long Beach, California on November 25, 2008 for the release of the compilation CD Alone II: The Home Recordings of Rivers Cuomo. The event was done in the "hootenanny" style (as utilized by Weezer during the Troublemaker Tour that same year), with fans providing instrumentation and Cuomo providing only vocals. Approximately 150 fans attended the event.

The event was filmed and released in both CD and DVD formats the following year as Not Alone: Rivers Cuomo & Friends Live at Fingerprints. 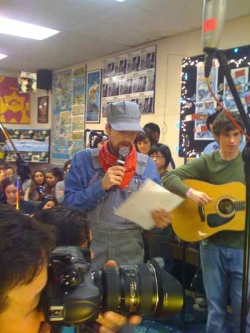 Rivers Cuomo with fans at the event

The idea for an Alone II hootenanny was first publicly mentioned by Cuomo a month prior in an interview with Pitchfork published on October 27.[1]

The event was announced on Myspace on November 5:

Fingerprints is ecstatic to announce an album release event straight from the imagination of Rivers Cuomo. It's a bit different for us, so read all the way through, including the details at the bottom about how you can join us for this once-in-a-lifetime event.

Rivers talked about the event in a recent interview with Pitchfork... here's how he explained what will be happening on our humble little stage on Tuesday, November 25th:

"I am doing a really cool event to promote Alone II on the day of release. It's basically another Hootenanny, but it's a little different. Anyone can be a part of it, you don't have to bring an instrument. But if you do bring an instrument, you will be part of the team that gets to pick the songs we play. It can be any song, in some cases, it might just be one person who says, like, "Oh! Let's play this obscure B-side!", and he may be the only person in the room who knows it, besides me, and then it will just be me and that person giving a concert to the rest of the room. And then the next song, there might be 20 people who know it. So that will be a very dynamic event and very fun for me. And I won't have to bring a guitar [laughs]. " - Rivers Cuomo

We will be opening the guest list at 11:00am on Thursday, November 6th. The list will be open to people that pre-order Rivers' new album, Alone II: The Home Recordings , with a limit of two spots per person. We are looking for both musicians and non-musicians and will be managing the list to make sure we have enough of both, please don't buffalo us by saying you'll play if you won't. Space will be more limited than usual, as we're leaving a bit of extra room to move around with instruments.

** Please note that we will be accepting RSVP pre- orders for this performance via phone (562.433.4996) and in-person, but purchasing through the website will not get you in to see the performance.

Cuomo began the event by asking the attendees which songs they should perform. Due to the volume of people shouting simultaneously, Cuomo resolved to ask for suggestions by picking letters of the alphabet and receiving suggestions from whichever musician brought the most unique instrument that begins with that letter. For the letter "V," Cuomo chose himself as "vocalist" so that he could add his own suggestion, "Can't Stop Partying." Prior to the event, members of the Albumsix fan forums attempted to coordinate in order to maximize the number of rare or unheard songs played. In 2006, Cuomo shared sheet music for the song "Getting Up and Leaving" on his Myspace account, and fans pushed for the song to be performed at the show in hopes of having it be heard in some form. Despite lacking sheet music for the chorus, Cuomo agreed to sing a partial rendition. The song was not heard in full until its release on the deluxe edition of Pinkerton in 2010.