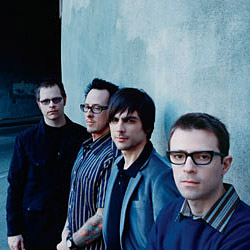 We were curious/suspicious when we got a tip that the url albumsix.com rerouted to the official Weezer web site, Weezer.com. As many of you know, the band famously went on hiatus following the release of their fifth album, Make Believe. When he graduated from Harvard and got married, we figured we’d heard the last of Rivers Cuomo for at least a little while. But then a solo demo for Cuomo’s song “Pig” leaked. And now, with this cryptic rerouting link, we ask the question: Is a new Weezer album on the horizon? We did some research.

According to a domain search, the AlbumSix web site was registered to Interscope Records and not some overzealous Pinkerton fan. The conspiracy theorists will argue “Weezer is on Geffen, not Interscope, duh.” Well, they’re sort of right. Both Geffen and Interscope are bundled under the giant Universal Media Group umbrella, so the plot remains thick.

A query to Weezer publicist Jim Merlis resulted in his insistence that “the band didn’t do this [albumsix.com].” Conclusive…but vaguely hopeful. OK, fine, the band didn’t create the page. (Cuomo went to Harvard but we doubt he knows HTML.) But the question remains: Are there signs that Weezer is prepping a new record? They are under contract for two more albums. Either way, we’ll keep you updated as to whether this recent revelation is truth or hoax.