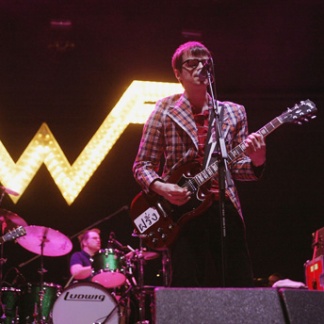 As we told you yesterday, Rivers Cuomo will soon release a compilation of demos without his Weezer counterparts. Alone: The Home Recordings Of Rivers Cuomo 1992-2007 will hit aisles and digital shelves on December 12th. Following Cuomo’s surprise announcement via his personal MySpace blog, Rolling Stone’s Brian Hiatt spoke to Rivers regarding the demos and the latest news in Weezerland. According to Cuomo, the comp will have roughly “eighteen tracks, and it’s spanning my demo-making career from 1992 to 2007, and there is one Weezer classic, ‘Buddy Holly,’ my original demo for that song, and there’s a few covers.” One of the covers, we’re proud to reveal, will be of Ice Cube’s “The Bomb.” That was not a typo. Cuomo is apparently an AmeriKKKa’s Most Wanted fan, but then again, who isn’t?

“In terms of the remaining tracks, “several of them are from my unfinished rock musical, Songs From the Black Hole,” Cuomo tells us. Black Hole, a space rock concept album, was initially supposed to be Weezer’s follow-up to their debut Blue record, but when the project came unglued, some of the tracks wound up in another form on Pinkerton, while the rest have been floating around for a while until Cuomo gathered them for this collection. But enough about yourself, Rivers, tell us about Weezer’s new album. “We’re done recording, and we’re just waiting to find a mixer. It’s very fresh and experimental,” Cuomo said. No word on what exact date the Rick Rubin-produced album will come out, but we stand by our initial Spring 2008 prediction.