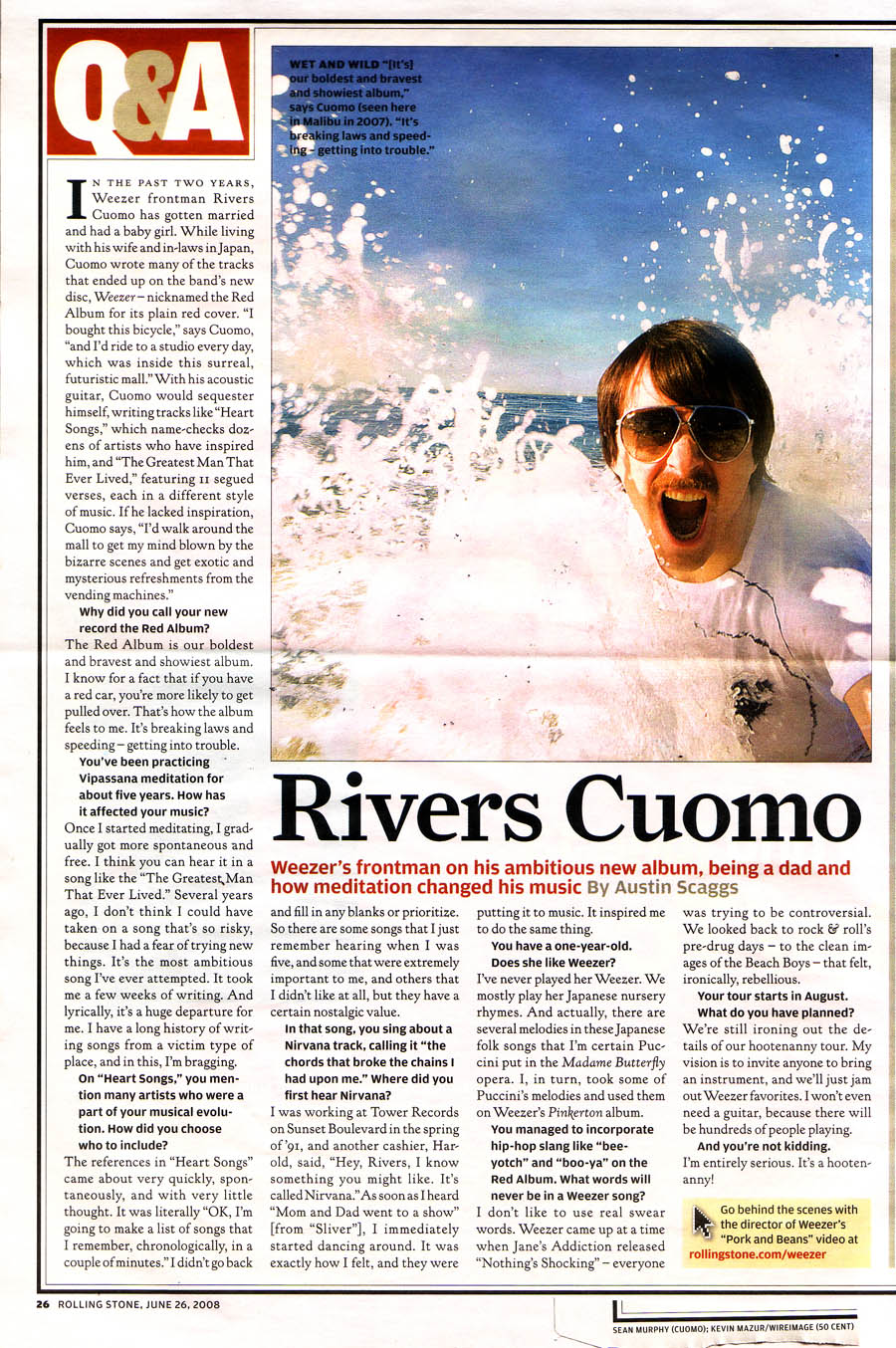 Rivers Cuomo
Weezer's frontman on his ambitious new album, being a dad and how meditation changed his music
by Austin Scaggs


In the past two years, Weezer frontman Rivers Cuomo has gotten married an had a baby girl. While living with his wife and in-laws in Japan, Cuomo wrote many of the tracks that ended up on the bands new disc, Weezer - nicknamed the Red Album for its plain red cover. "I bought this bicycle," says Cuomo, "and I'd ride to a studio every day, which was inside this surreal, futuristic mall." With his acoustic guitar, Cuomo would sequester himself, writing tracks like "Heart Songs," which name-checks dozens of artists who have inspired him, and "The Greatest Man That Ever Lived," featuring 11 segued verses, each in a different style of music. If he lacked inspiration Cuomo says, "I'd walk around the mall to get my mind blown by the bizarre scenes and get exotic and mysterious refreshments from the vending machines."

Q: Why did you call your new record the Red Album?
A: The Red Album is our boldest and bravest and showiest album. I know for a fact that if you have a red car, you're more likely to get pulled over. That's how the album feels to me. It's breaking the laws and speeding - getting into trouble.

Q: You've been practicing meditation for about five years. How has it affected your music?
A: Once I started meditating, I gradually got more spontaneous and free. i think you can hear it in a song like the "The Greatest Man That Ever Lived." Several years ago, I don't think I could have taken on a song that's so risky, because i had a fear of trying new things. It's the most ambitious song I've ever attempted. It took me a few weeks of writing. And lyrically, it's a huge departure for me. I have a long history of writing songs form a victim type of place, and in this, I'm bragging.

Q: On "Heart Songs," you mention many artists who were a part of your musical evolution. How did you choose who to include?
A: The references in "Heart Songs" came about very quickly, spontaneously, and with very little thought. It was literally "OK, I'm going to make a list of songs that I remember, chronologically, in a couple of minutes." I didn't go back and fill in any blanks or prioritize. So there are some songs that I just remember hearing when i was five, and some that were extremely important to me, and others that I didn't like at all, but they have a certain nostalgic value.

Q: In that song, you sing about a Nirvana track, calling it "the chords that broke the chains I had upon me." Where did you first hear Nirvana?
A: I was working at Tower Records on Sunset Boulevard in the spring of '91, and another cashier, Harold, said, "Hey Rivers, I know something you might like. It's called Nirvana." As soon as I heard "Mom and Dad went to a show"[from "Sliver"], I immediately started dancing around. It was exactly how I felt, and they were putting it into music. It inspired me to do the same thing.

Q: You have a one-year-old. Does she like Weezer?
A: I've never played her Weezer. We mostly play her Japanese nursery rhymes. And actually, there are several melodies in the Japanese folk songs that I'm certain Puccini put in the Madame Butterfly opera. I, in turn, took some of Puccini's melodies and used them on Weezer's Pinkerton album.

Q: You managed to incorporate hip-hop slang like "beeyotch" and "boo-ya" on the Red Album. What words will never be in a Weezer song?
A: I don't like to use real swear words. Weezer came up at at time when Jane's Addiction released "Nothing's Shocking" - everyone was trying to be controversial. We looked back to rock & roll's pre-drug days - to the clean images of the Beach boys - that felt, ironically, rebellious.

Q: Your tour starts in August. What do you have planned?
A: We're still ironing out the details of our hootenanny tour. My vision is to invite anyone to bring an instrument, and we'll just jam out Weezer favorites. I won't even need a guitar, because there will be hundreds of people playing.

Q: And you're not kidding.
A: I'm entirely serious. It's a hootenanny!