From Weezerpedia
(Redirected from SPELL)
Jump to: navigation, search 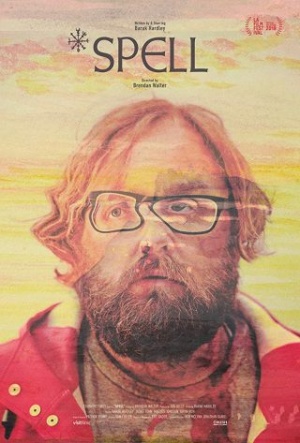 Spell (stylized as SPELL) is a 2018 film. It is the first motion picture project from Crush Management, the management company of Weezer. Though it does not appear on the official soundtrack, "California Snow" plays over the film's credits. This release came prior to the song's official appearance on The Black Album. Rivers Cuomo makes a voice-over cameo appearance in the film as a "Dr. Haskell."

Crush's film division, Crush Pictures handled the movie's production. The film was written by and stars Barak Hardley, and was directed by Brendan Walter, who has directed several of Weezer's music videos. It was scored by Patrick Stump of Fall Out Boy [1]. The film debuted at the LA Film Festival on September 23, 2018.

Prior to the film's debut, some unusual and cryptic PR moves popped up, including a satirical, one-off billboard featuring Cuomo's face made as an "ad" for his character's medical practice: ("Rivers Haskell Family Therapy"). The billboard appeared in the Los Angeles neighborhood of Silver Lake. Also found around town were tear-off flyers with similar information, along with an accompanying website. All of these were made to look like "organic" ads, with no immediate mention of the movie or studio.

After the death of his fiancée, an American illustrator runs out of medication while wandering the isolated Icelandic countryside - unsure if his compulsions are related to his disorder or if he's being forced to unlock ancient secrets.