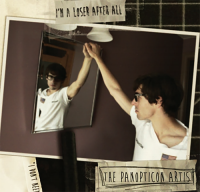 Sebastian as seen in the album's liner notes

Sebastian is a character from the 2014 Weezer concept album Everything Will Be Alright in the End. He is the son of Joe Laffoley and Claire, and the lead musician in a band called The Astronauts. According to the album's liner notes, he is portrayed by Clyde Field, as well as in the teaser videos portrayed by actors Zach Kanner (as an adult) and Lucas Martin (as a child). His life and appearance appears to be largely analogous to that of Weezer frontman Rivers Cuomo.

As a child in 1976, Sebastian dreams of a monster. He tells his mother of his nightmares and she assuages him: "Go back to sleep, honey. Everything will be alright in the end." On November 2, 1985, he leaves home and moves to Los Angeles. In 1986, a bunch of other boys pick on him and throw him into a dumpster. At some point, he forms the band The Astronauts. Sometime later, possibly around 1991, he meets with Electric Records executives George Blotkin and Cleo, who give him a stack of mysterious books. Blotkin promises that they have "the most powerful and modern tools to guarantee [his] exposure to the greatest number of people." Sometime, possibly around 1994, Sebastian rejects their help, telling them to "enjoy [their] headphones", before taking the books and storming out. At some unknown date, The Astronauts win an award for Album of the Year, which Sebastian dedicates to his late father, Joe Laffoley. At some date, he becomes romantically involved with Bella, but they later get into a fight. At some point, Sebastian car breaks down or crashes. The Astronauts' presumably sophomore album, titled Help Me, went on to be a critical failure, and features a song titled "My Body Pain".

Rivers Cuomo dressed as Sebastian (wearing a white jumpsuit with an American flag and a name tag reading "Sebastian") during the Everything Will Be Alright in the End Tour and is credited as Sebastian in the tour program[1]. He also wore the outfit in the music video for Back to the Shack.

Tell Me What You Want, a song written for Van Weezer, is the first song outside of Everything Will Be Alright in the End to be written from Sebastian's perspective.