Songs from the Forthcoming "Maladroit"

From Weezerpedia
(Redirected from Songs from the Forthcoming Maladroit)
Jump to: navigation, search

Songs from the Forthcoming "Maladroit" is a CD music sampler released by Weezer in 2002, without the knowledge or permission of the band's label, Geffen.

The band produced the CDs and hand-mailed them to radio stations. Songs from the Forthcoming "Maladroit" is the title listed on the front cover, while the CD spine simply reads "Maladroit Sampler". The CD includes non-finalized versions of eight of the thirteen songs featured on the final disc. There is no mention of Geffen on the packaging, or any label aside from the Rivers Cuomo vanity label E.O. Smith Music. Karl Koch recalled the album in a chat with the Weezer Fan Club over the video conferencing platform Zoom in June of 2020:

This was sent out by hand—we were stuffing envelopes—and we got the list of all the radio station addresses and who to send this to...we sent out hundreds of these things all over the country. Again, the label did not know we were doing this, even though we specifically asked them "Could you please get us the list of the radio stations you send CDs to?" They're like "Oh, sure! What do you need that for?" "Ah, don't worry about it!"

According to Koch, Cuomo changed his mind multiple times about how to mix certain songs, and so three different versions of the CD exist in circulation, all with nearly identical packaging. The versions can be distinguished only by the matrix/runout number printed on the inner ring of the disc:

Following the release of the CD, various radio stations began airing the new songs, and publications began reviewing them, which brought the attention of Geffen. The label subsequently insisted that Cuomo write a letter to every radio station that had been sent the CD, asking them to hold off on promoting the tracks until the record company was ready to service the "Dope Nose" single. 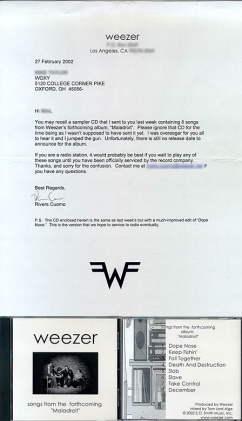 A scan of a letter sent to a radio station by Rivers Cuomo asking them to refrain from playing any of the songs.

All songs written and composed by Rivers Cuomo.