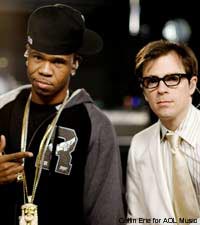 Weezer sure know how to throw a party, and on Thursday the guest list included rapper Chamillionaire, pop songstress Sara Bareilles and smooth-jazz king Kenny G.

Yes, you read that correctly.

The unlikely cast of characters assembled in Beverly Hills, Calif. -- the setting for both AOL's West Coast studio and one of the band's biggest hits -- to tape Weezer's five-song Sessions in support of their new album, 'Raditude.'

"I don't know anything about Weezer -- nothing," Kenny G, who's sold 75 millions albums worldwide, admitted to Spinner. "I've heard the name, but I never knew any of their songs [except] some song about a sweater ... with the wool coming apart?"

During sound check, Weezer frontman Rivers Cuomo -- who lives down the street from the superstar saxophonist in nearby Malibu but had never met him prior to the taping -- instructed Kenny G that he'd have a solo after the second chorus of the new Weezer track 'I'm Your Daddy.' "It's 100 percent winging it," Kenny G said, while warming up in the green room. "But that's OK. I'm a professional."

They nailed it in one take.

Bareilles, best known for her Grammy-nominated 2007 hit 'Love Song,' is no stranger to the Weezer clan, having recently filmed a video for the acoustic version of the lead single off 'Raditude,' titled '(If You're Wondering If I Want You To) I Want You To.' "Rivers basically made [the song] into a duet, so we go back and forth on the vocals," Bareilles said. Meanwhile, she will also join Weezer for a performance of the song on 'Jimmy Kimmel Live' Friday night.

But it was the collaboration with Chamillionaire on the 'Raditude' track 'Can't Stop Partying' that set the studio ablaze. (The album version of the track boasts Lil Wayne, who pleaded guilty to gun possession charges Thursday.) Chamillionare flew in from Houston that day just for his guest spot. Cuomo, a huge fan of Cham's hit 'Ridin'' and the subsequent Weird Al parody 'White and Nerdy,' had no idea what to expect from the rapper. "We didn't know if he was going to do Lil Wayne's verse or something different. He blew us away!" Cuomo said after the taping.

"It happened last minute," Chamillionaire said. "Do I want to work with Weezer? I was like, 'Heck yeah!'" Chamillionaire wrote his verse only a couple of hours before the performance.

Cuomo, accompanied for the day by his wife and toddler daughter, changed outfits for each song performance -- from the band's matching gray tracksuits to a candy-striped onesie for the big finale: an acoustic cover of Green Day's 'Brain Stew.'

So, why all the oddball extracurriculars? "We need to find a way to keep things interesting," Cuomo said.