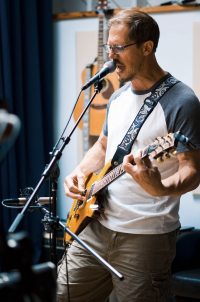 Studio C is the studio in Oakland, California owned and operated by Jason Cropper. It is known as the headquarters for The Jason Cropper Band.

Cropper purchased Studio C in 2017 and first shared a photo of the newly acquired space on Instagram the same year. The studio is operated by Cropper, Rob Ahlers, Brian J. Kenny, and Zollie Fears. In 2018, Studio C was used to record and produce Brian J. Kenny's album, Topical Tunes for Troubled Times. Cropper's 2022 album was produced and recorded in the studio as well.

During the COVID-19 pandemic in 2020, Studio C was used as a place for The Jason Cropper Band to come together and perform virtual livestreamed concerts of The Golden Hour in a socially distanced manner. The studio is also available for musicians in the Oakland area to rent out. The gear in Studio C ranges from amplifiers, keyboards, pianos, vocal mics, universal audio interfaces, a drum collection, as well as a guitar and bass collection. The same bass guitar used on Chopper One's debut album, Now Playing resides at Studio C as well.