"Superman" (later reworked as "The Road My Father Paved") is a demo by Rivers Cuomo.

According to the Weezer Recording History, "Superman" was recorded in May of 1992. Scans of handwritten lyrics were made available to fans by Cuomo in 2002 through the Grand File on riverscuomo.com, including an alternate version of the song titled "The Road My Father Paved". The song would not be heard by fans until it was leaked online through the site's demo storefront on November 7, 2020. The song was then sold to a single user when the storefront officially launched a few days later on November 11, before being sold to all users as part of the digital compilation Alone IV: The Blue-Pinkerton Years on November 22. 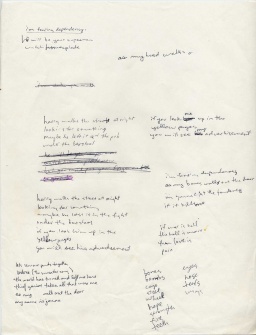 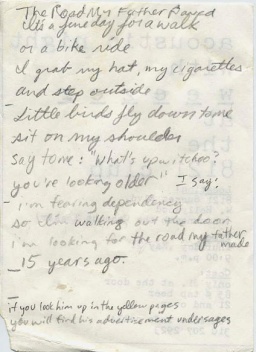 Handwritten lyrics for "The Road My Father Paved"

I would be your Superman
And watch me explode
I'll give you what you need now
And what you know
Yeah, yeah

I’m fearing dependency
And I'm running back for more
Gonna find your last name, babe
If it kills me more and more

Love is pain and what will be remains

I will be your Aquaman
Under the water
Swimmin' with the fishies, now
Looking for father

Love is pain and what will be remains
To be seen in the distant future
Looking for the meaning of it all
Hoping that you are going to call me
On the telephone so fast now
Go, go