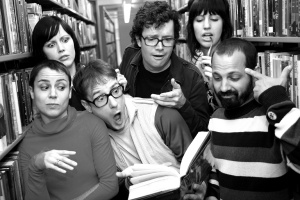 Rachel Haden grew up in a household where music was as ubiquitous as Mom’s apple pie. As the daughter of jazz musician Charlie Haden, one would expect Rachel to have learned about music in a traditional fashion. However, in a household with so many varying musical tastes, this couldn’t have been further from reality.

"My brother Josh listened to a lot of old L.A. punk, including the Minutemen," Haden said. "Mike Watt’s bass playing was like piano playing to me. That’s how I took up the bass, listening to those old Minutemen songs. They were like scales to me."

Haden and her unorthodox style will join former Weezer bassist Matt Sharp’s band, The Rentals, this Friday at the Henry Fonda Theater at 9 p.m. This show will be The Rentals’ first in Los Angeles since 1999, after the band went on a long hiatus. In October 2005, Sharp reunited the band to not only tour and celebrate its 10th anniversary, but also to record the band’s third album, to be released in 2007.

Yet Haden has a history with The Rentals that stretches back longer than any member of the band aside from Sharp himself.

Haden was approached by Sharp 10 years ago about singing on songs he had written. While she was unclear on exactly what Sharp had planned for his music, Haden agreed.

"I wasn’t a member of the band, because there wasn’t a band yet," Haden said. "I sang on about six or seven songs, and Matt started to slowly get a band together and wanted me to be a part of it, but I couldn’t do it at the time."

Rachel’s triplet sister, musician Petra Haden, took over her vocal duties in The Rentals and became a full-fledged band member in Rachel’s stead. The songs Rachel had recorded with Sharp were mostly redone with Petra on vocals and appeared on the group’s 1995 debut, Return of The Rentals. However, Rachel Haden’s vocals remain intact on one song, "Move On."

"It was strange at first to hear all the Petra vocals, because they sound like me and I originally did them," Haden said. "At first I was upset that they redid my vocals, but it was really my fault because I didn’t want to continue. Now, it’s like a natural progression – like I’m finishing what I started."

One of the reasons Haden was not involved with The Rentals’s initial run was that she was playing bass with L.A. indie band that dog. with singer/guitarist Anna Waronker for much of the 1990s. Haden looks back on that dog. and its fans fondly, but her experience with the group in many ways mirrors Sharp’s experience with Weezer.

"(Matt) has always had his own musical vision, and I remember talking with him about that years ago,” Haden said. “We were both involved with bands where we were very important to the band but it was ultimately someone else’s vision. We were both songwriters struggling with that."

Aside from that dog., Haden spent the years between recording the first Rentals songs and the band’s recent reunion on a variety of different projects. She sang with Jimmy Eat World on the band’s 2001 self-titled LP, and the group took her on tour for a couple of years during which she provided backup vocals and played keyboard. Additionally, her tenure with that dog. allowed her to befriend many musicians, which led to Haden appearing on songs with various different groups throughout the years including Ozma, Beck and Nada Surf.

"I took a long break at one point and got a nine-to-five job and wrote music by myself and didn’t share it with anyone," Haden said. "I would get fan mail from people asking if I fell off the face of the Earth and I would always ignore that. Now, I’ve realized that this is something I should be doing, and it gets me excited that there are old fans of that dog., Weezer and The Rentals who are excited about me appearing again; I’m able to stop thinking about myself and just think about making them happy."

Now that Haden is finishing what she began a decade ago, she feels lucky to be involved again. Describing what she feels is a pattern, Haden said she often has a hard time finishing things she begins. The difference this time is that she has grown as a musician and a person in the past 10 years and now feels a sense of accomplishment that she didn’t always get before. In those years, Haden wasn’t sure if she wanted to even be part of a band.

"Back then I was confused, asking things like ‘Who am I?’ ‘Where am I?’ ‘Why am I?’" Haden said. "Now, I know that music and singing is what I do, and here I am in this band where the music and the band are just beautiful."

Haden’s 10-year, on-and-off journey with The Rentals comes full circle as the band’s reunion tour kicks off this week. And as the tour begins, Haden feels that she is finally in a situation where she feels comfortable both with continuing to expand as a musician and in returning to play in front of old friends and fans.

"I think the No. 1 thing people say when they see me is ‘I miss that dog.; I miss those songs; I miss the ’90s!’" Haden said. "I’m proud that I was a part of that and that I was able to be an influence on people. The fans are still there – they haven’t given up."

For the sake of music fans, it’s a relief that Rachel Haden hasn’t either.