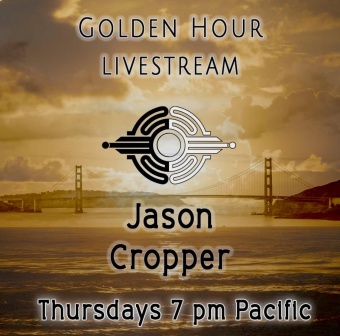 Online advertisement for The Golden Hour.

The first stream of The Golden Hour was held on May 21, 2020 on Instagram live. The Golden Hour was created as a way to connect with fans and friends at home during the COVID-19 global pandemic. Cropper began streaming The Golden Hour every Thursday live on Instagram, Facebook, and YouTube. The setlists would consist of songs Cropper was preparing for his upcoming solo album as well as covers of various different artists, such as The Beatles, Weezer, and Little Feat. Cropper originally performed The Golden Hour at home on acoustic guitar.

As the COVID-19 pandemic started coming to a close, Cropper began performing The Golden Hour live with his bandmates Rob Ahlers and Brian Kenny as The Jason Cropper Band in their shared studio space, Studio C with electric guitars, keyboards, and drums.