This page is for the bootleg release. For the demos by Weezer, see The Kitchen Tape and The Real Demo.

The Kitchen Tapes and First Real Demo is an unlicensed bootleg CD-R released in Japan in 2001 or 2002. 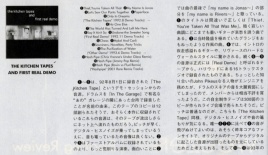 The Kitchen Tapes and First Real Demo is a compilation of various Weezer and Rivers Cuomo demo recordings, as well as all of the officially released "Hash Pipe" remixes. The release is of notably low quality, with multiple typos and track listing errors.

The release was featured in a June 2002 edition of Beatleg Magazine, a Japanese publication focused around music reviews and circulating bootlegs. The review posits that only around 300 copies of the CD were produced. The inclusion of the song "Hash Pipe" dates the release at no earlier than 2001.