The Pinkerton Diaries as described by Rivers is “a collection of my journals, emails, letters, photos, and school papers — so you get an inside look as to exactly what I was thinking [when I wrote Pinkerton]”. The book covers the years 1994 to 1997, beginning on May 10th, 1994, the day the Blue Album was released. Rivers’ personal journals included in the book detail everything from the confusion and excitement of trying to figure out girls, to the physically and emotionally harrowing medical struggles he underwent for over a year to correct a congenital leg length discrepancy. Also included are Rivers’ lyric notebooks, music compositions, and studio notes from the Pinkerton sessions. It's meant to be a companion piece to Alone III: The Pinkerton Years 1994-1997, with the disc stored in the back of the book. 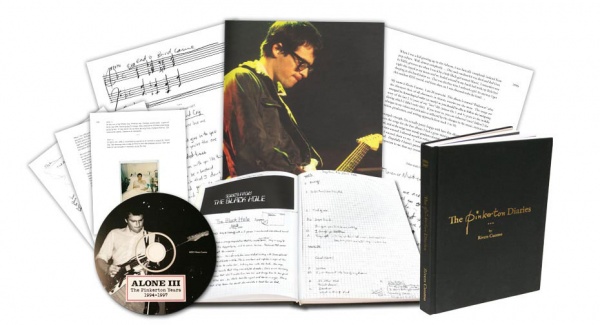 A view of the inside contents of the book along with the Alone III disc.