The Weezer Cruise was an event in both 2012 and 2014, where Weezer sailed on the Carnival Destiny from Miami to the island of Cozumel off of the Gulf Coast of Mexico from January 19-January 23, 2012 and on the Carnival Fascination from Jacksonville to the Bahamas from February 13-February 17, 2014. 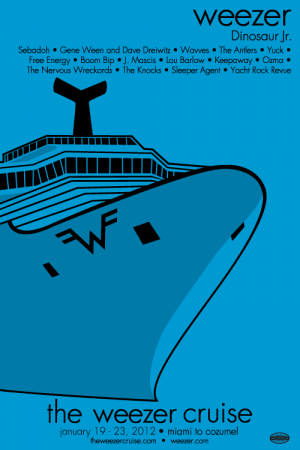 The first Weezer Cruise was first announced on July 12, 2011 along with the full list of performers planned to appear.[1][2] While Gene Ween and Dave Dreiwitz were originally announced as performers, they both had to cancel for undisclosed reasons.[3] Weezer performed three shows, the first being outside on the deck of the ship as it set sail and the other two Pinkerton shows taking place in the Palladium Lounge indoors. The cruise marks the first time the song Tragic Girl was ever played live, as well as the first time since the tribute show in 1997 that Mykel and Carli had been performed. 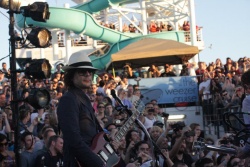 Fans could watch the film Young Frankenstein on the Lido deck via a giant screen Brian Bell. Many fans turned out in their Weezer snuggies.[citation needed]

Fans could have their picture taken with the band and later download the images once they arrived home. One fan took this moment to propose to his girlfriend.[citation needed]

Rivers read excerpts from The Pinkerton Diaries and then opened the floor up for a Q&A. Some of the questions asked included: his songwriting method, Songs from the Black Hole, the time period around Pinkerton, and what is next for Weezer. A particularly amusing moment was when a fan asked what it was like to work with the Muppets, to which Rivers replied regarding the puppeteers, "You don't even focus on the human being at all, it's like he's not there! It's like Kermit is real. That was surprising to all of us."[citation needed]

Scott Blair of Magic Hugs and cruise video fame hosted a trivia game that pitted Pat Wilson, Scott Shriner, Brian Bell, and Josh Freese against each other. They battled it out through music, boat facts and general knowledge questions with fan participation.

Fans gathered late in the night as Karl Koch deejayed on the dance floor. If you listened carefully, the sounds of unreleased material could be heard.[citation needed]

Couples could get together and have their vows renewed with Scott Shriner.

Fans who participated in the Shuffleboard tournament and made it to the finals got to hang with Pat Wilson as he hosted the finale to this tournament.[citation needed]

Following the Group Photo, Weezer did a question & answer session on the Lido Deck.

Fans split into teams such as The Little Bitches went head to head in a battle to see who knows the most. The questions were quite difficult.[citation needed]

The display case on the cruise.

Inside a glass case near the casino, Weezer had some artifacts from throughout their history on display. Among the original lyric sheets and old school fan club memorabilia they had on display their awards for Pinkerton being certified Gold, Blue being certified Platinum, a Grammy for the Pork and Beans music video and an MTV moon man for the Buddy Holly music video.

Everyone put on their best 80's outfit and met up in the disco lounge for a fun party that lasted into the early hours of the morn. You could spot Pat and Rivers in a full captain outfit if you looked closely.

Everyone was encouraged to wear a fake mustache, mustache socks, mustache shirts or anything mustache related this night.

Many fans donned custom made Weezer sweaters that were quote-unquote "ugly".

Below is the full Weezer Cruise Schedule. 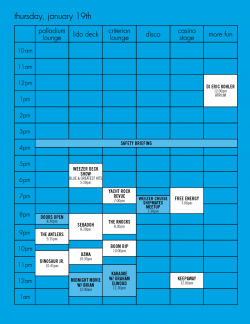 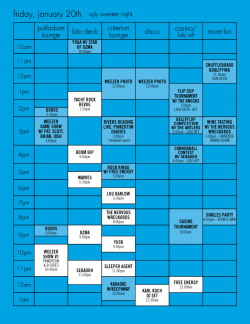 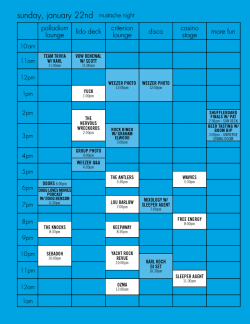 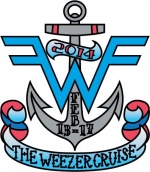 The logo for the second Weezer cruise.

A second Weezer cruise set sail February 13-17, 2014 from Florida to the Bahamas via Rose Tours aboard the Carnival Fascination. It featured similar shows and events.

One major difference was the island show in Nassau, The Bahamas. The song Back to the Shack, the first single to their (at the time) forthcoming record, Everything Will Be Alright in the End was debuted live on the island. Another big event was the 20th Birthday party for Weezer featuring a cake along with Rivers in a wig as a throwback to the old-school bowl cut he used to sport around 1994.

A third Weezer concert has not materialized, despite being mentioned by the band in the press[citation needed]. Sheezer, a Canadian all-female Weezer cover band, has been offered a slot on for a future Cruise.