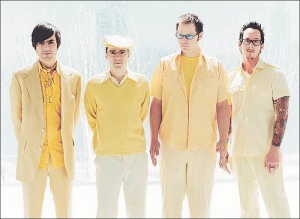 The band "Weezer." with Toledo native and bass player Scott Shriner on the right.

By JON STAINBROOK
SPECIAL TO THE BLADE

Toledo native Scott Shriner listened intently to the voice on the other end of the telephone, and then nearly hung up.

The caller identified himself as Weezer frontman Rivers Cuomo, and made a surprise request: Would Shriner play bass for the alternative garage rock band?

Shriner, who was then living in Los Angeles in 2001, thought it was a prank, but the caller seemed sincere.

Shriner accepted the offer and in time the now-40-year-old musician became a mainstay in one of the top bands playing American rock music.

It was a band that cut its teeth on angst-ridden nerd anthems - smart guys who don't get the girls - while poking fun at the establishment and letting the air out of America's corporate music tires.

Shriner's harder-edged delivery solidifies his place as the band's third bassist. Since Shriner joined Weezer, the group has received a Grammy nomination, prepared a music video with the Muppets, and in May graced the cover of Rolling Stone magazine.

Not bad for a Start High School grad once told by a former Marine who was his school adviser that he needed some kind of direction in his life. Shriner ended up joining the Marine Corps in 1984, and he credits his two-year stint for giving him the motivation and determination to zero in on what he really wanted to do: play music.

When he returned to Toledo, he immediately began playing bass in some now-extinct local groups, The Exciters and Loved by Millions. He played in The Barbecue Gods, which had a long run at Frankie's in East Toledo, before he packed up and moved to California in 1990 at age 25.

Shriner has fond memories of growing up in Toledo.

"We'd ride our bikes to bowl at Jugs or Miracle Lanes, watch B movies, sneak into the Miracle Mile Drive-In, and play Asteroids at Godfather's Pizza. One of my favorite spots was the Westwood Art Theater. At midnight on the weekends, they would show the Jimi Hendrix movie and Led Zeppelin's The Song Remains the Same."

Back then, few places were showing such films. "After seeing the Zeppelin movie back in Toledo, I realized I wanted to be [bass player] John Paul Jones, but it has taken me all of this time to realize this goal."

Although he loved Toledo, he realized he needed to leave to fulfill his dream. Shriner compares Toledo to something out of an episode of Father Knows Best.

"There was just something about the town, a certain kind of close-mindedness toward creativity, like suffocation to me," he said before pausing for a moment. "Like, stay home, do your work, go to school, go to this college, then buy a house in your neighborhood. It really [means] people who want a different kind of lifestyle have to bust out and try hard to reach out and do something. I love Toledo, but I had to leave."

After being in California for a few years, Shriner's first return home was in 1999, as a bassist backing Vanilla Ice in a sold-out concert after the rapper had changed his sound to a heavy-edged hard rock. Shriner said the gig was just a chance to make money to supplement his day job.

He approached his Toledo return with mixed feelings because of Vanilla Ice's image as a washed-up pop star.

"I wanted my family and friends to come out, but I wasn't necessarily proud of playing bass for Vanilla Ice for my big homecoming," Shriner said. "My 78-year-old grandfather was totally proud of me, and it was a big deal for him to see me play. That was priceless."

One of his highlights as a member of Weezer was playing in a sold-out show this fall in Joe Louis Arena in Detroit.

"I saw Rush, U2, and The Police at Joe Louis Arena," Shriner said. "Playing a double bill with the Foo Fighters, my family there, and all the old hockey pictures on the wall, I knew I had made it."

Weezer has just returned from a whirlwind yearlong tour covering Japan, Europe, and Australia. The band shot its "Beverly Hills" video in the Playboy Mansion chock-full of Playmates and Hugh Hefner himself. Now the band is taking a break while Cuomo finishes his English literature degree at Harvard University. Shriner just married his sweetheart, Jillian, last month in Hawaii, and the band also just released a disc, "Winter Weezerland."

"I have been enormously blessed and I am very thankful for all the support I have had from my family and friends in Toledo," Shriner said.

Now that Shriner is bassist in a famous band, is he mobbed by fans during every visit home?

"I come back to Franklin Park Mall and get the same kinds of weird looks that I got there as a kid," he said. "Everyone couldn't care less that I play bass in Weezer, one of the biggest indie bands in the world. It is humbling. To them, I'm still the same old loser."