"Underground" (also known as "Sing to Me Slow" and "The Hermit Song") is a song written by Rivers Cuomo in 1991.

Cuomo recorded a song fragment titled "Sing to Me Slow" to his 8-track while living at 2914 Urban Avenue in West Los Angeles during the summer of 1991, and demoed it again under the title "Underground" in late summer or fall of that same year. In the Weezer Recording History, Karl Koch described this demo as such: "Rivers reacts to the advent of "grunge" music. Song is deemed too.... something... for 60WS.".

The band that would be named Weezer formed on February 14, 1992. During the band's third practice, the song was rehearsed as a band. Koch added, in the Recording History, that the song was never quite a Sixty Wrong Sausages track, and "never settled in" as a Weezer track.

The song is known to have been performed live once, acoustically, at the band's third show on April 7, 1992 at 8121 Club in Los Angeles.

Though the song wouldn't be heard by fans until 2021, when it was a part of a group of demos that leaked, the lyrics to the song have been known since the early 2000's. This is because Cuomo uploaded a scan of the lyrics to his his personal website at that time. 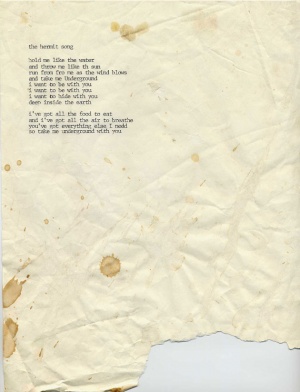 Once upon a time, in rock and roll history