"Waiting" is the second single and second track from the Rentals' debut album, Return of the Rentals.

"Waiting" was most likely written between fall of 1993 and spring of 1994. Matt Sharp produced a 4-track demo recording of the song during that time.[1] "Waiting" debuted on MTV's 120 Minutes in February of 1996.[2] A not-for-resale promotional CD was produced, featuring only the album version of the song. The song, ultimately, failed to chart.

The song was covered by the band Motion City Soundtrack and featured on the Japanese 2010 tribute compilation Lost Out in the Machinery - Songs of the Rentals. The band Ozma, accompanied by Matt Sharp, covered the song at a concert in 2011.

The music video for "Waiting" was directed by Roman Coppola[3][4] and features the band's touring musicians at the time, including Maya Rudolph on keyboards and Mike Fletcher on drums. A variation of the music video was created for MTV for the film Joe's Apartment, which featured "Waiting" on its soundtrack. 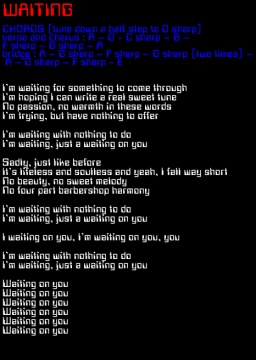 I'm waiting for something to come through
I'm hoping I can write a real sweet tune
No passion, no warmth in these words
I'm trying, but have nothing to offer

I'm waiting with nothing to do
I'm waiting, just a waiting on you

Sadly, just like before
It's lifeless and soulless and yeah, I fall way short
No beauty, no sweet melody
No four-part barbershop harmony