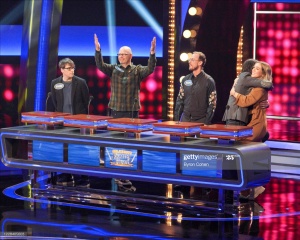 Weezer on Celebrity Family Feud
Weezer appeared as contestants on the sixth episode ("Ray Romano vs. Brad Garrett and Fall Out Boy vs. Weezer") of the seventh season of the broadcast American game show Celebrity Family Feud on September 20, 2020. The four band members were joined by producer Suzy Shinn, and competed against Crush Music label-mates Fall Out Boy (themselves joined by actor and director Seth Green).

The filming of the episode first reached the attention of fans on the day of filming, February 7, 2020, when a video of the show was uploaded to Instagram by an audience member. That same day, Suzy Shinn tweeted a photo of Family Feud nametags for herself and Rivers Cuomo.

The episode aired on September 20, 2020. Fall Out Boy was the winning team.