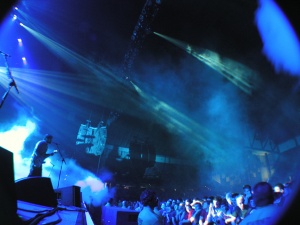 On May 2, 2002 Weezer performed in Fargo, ND at the Fargodome on the Dusty West Tour in support of Maladroit. The opening acts were AM Radio and Pete Yorn.


...alright, whoever thought that Fargo, North Dakota would be home to the Biggest Arena of All Time? This Fargodome, AKA the Enormodome, was big enough for a Rolling Stones concert! or about 4 pro hockey games played side by side. Well, today they got weezer, so we used half the arena for the show, and the other half to put all the trucks and gear and stuff, and still had a few high school gymnasiums' worth of space to tool around in on scooters and what not. Well, we wish Fargo well in their dreams of attracting a Pro football team, or 4...theyve got the room, folks!
Anyway, tons o kids came in from all over to catch this show, as The Rock does not make it up to these neck of the woods too often [well, maybe wwf's 'The Rock' does, but not the more generalized music style 'The Rock'...but I digress...thank goodness...] Original =rwa=er Steve C made it down from Winnipeg, as did a bunch of other Canadians who Steve handily pointed out. No one had any funny accents like in the film "Fargo". We were forcefully reminded that most of that movie takes place in a small town in rural Minnesota. We wont goof it up again!

...Just got back from the Fargo weezer show. It was amazing. I was surprised by how many songs they played from pinkerton--about 4. Why Bother, Tired of Sex, Good Life, El Scorcho. It was incredible when they played Only in Dreams and the confetti came down. The pit was just insane. Not even an inch to breath. All the 14 year old girls got pulled out before Pete Yorn was done. I'm pretty sure i lost my innocence tonight. The place was packed, a huge show for Fargo, the best rock concert they've had in the past 2 or 3 years. I hope they come back here soon... ---Mark, BJ, and Jacob

...All i have to say is W O W. I just got my ass rocked by weezer and i shall never forget it. The crowd could've been a little more into it, but i was amazed at what a great show it was. That was quite possibly the best concert i have ever attended. Pete Yorn and Am Radio were also awesome. I loved Rivers' comments between songs. All of the best Weez songs, all live........ I can now die the happiest girl on earth. Thanks go out to the boys for a kick-in-the-ass show!!! ---Stakey D.

...Weezer was amazing in fargo tonight. I have never seen a band rock with such force as them. Every song they played was amazing with the lights and the heart exerted into every song. Only in dreams, My name is Johnus, Burndt Jamb all hit me hard. I read your site daily and not even that could prepare me for the spectacle that they put on. I honestly dont think that any performance, ever, will surpass the one I have seen tonight. ---Nick Olsen, Jamestown ND

...the show tonight was spectaculous! once weezer hit the stage, the crowd was ridiculous. people were falling all over. only in dreams was great with the confetti and fog. rivers was especially chatty tonight, telling us "this one's all about the cheddar. i think you know what i mean." and "you're all my little sweet peas. we're all just peas in a pod." the end was crazy as rivers thought it appropriate to take a call on his cell phone. [...???] all in all, a great night! thanks for gracing us with your presence in north dakota! ---letty, katie, and cj

...RAWK ON! I just got back from the Fargo show tonight. It completely rawked my socks off. AM Radio was good stuff and Pete Yorn was all right too. This was my first time seeing Weezer and it just blew my mind away. I often caught myself watching the lighting more than the guys. If you haven't ever payed attention to it you should, it's amazing stuff. The set was awesome! Every song I expected to hear I did. And I have to say a HUGE "Thank You" to the security and staff of the Fargodome. 1)For not checking tickets so us kids who had elevated seating could come down on the floor with no questions asked. 2)For letting some jerk fall to the floor over the railing after being punched out because he was...well being a jerk to my friend. I especially enjoyed the encore when pat picked up the guitar and started jamming w/ rivers and scott. and his comment at the end, "They made a nice little movie about your city." ---b.w.b