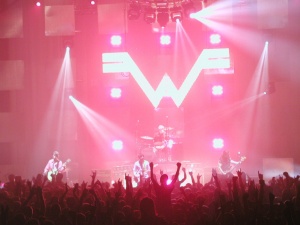 On May 5, 2002 Weezer performed in Lincoln, NE at the Pershing Auditorium on the Dusty West Tour in support of Maladroit. The opening acts were AM Radio and Pete Yorn.


...Tornado Watch! We caught a taste of wild midwest weather today, as a tornado watch was issued for Lincoln today. On cue the skies darkened and the clouds swirled, but we lucked out. Basically just a few random downpours happened, with no funnel clouds reported anywhere near the Pershing Auditorium. Inside the auditorium a storm of a different kind was going on. Pete Yorn came back from his side trip so the bill was a full 3 band show once again. Another extremely excited multi-state midwestern crowd freaked out all over the place, as the near summerlike temperatures got things sweaty and stinky... 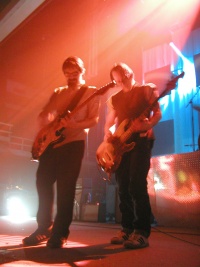 Rivers and Scott in Lincoln

...It started on Saturday morning when we woke up, packed up our car emblazoned with Weezer stickers and Minnesotan license plates, and began the 8 hour trip to Lincoln, Nebraska to see Weezer. We'd planned on enjoying the rock with friends and cousins, but after less than an hour on the road, the terror of a lifetime: car trouble. Forced to turn around, call off all plans, tonight a new plan was hatched--partaking in the concert via cell phone. Our cousin Fil kept calling us with updates, and when the intro began, we knew we were in for a weird yet unique concert experience. We were most stoked about "Burndt Jamb," but didn't know if the cell battery would make it until then. Well, it did, and a lot farther. "El Scorcho" was amazing, and we could hear from the crowd excitement that all was going fabulously. "Undone" sounded awesome. Half-way through "Hash Pipe" dead air met our ears, and the phone concert fun was over, but we just gotta say this: WEEZER IS THE PRIEST IN THE CHURCH OF ROCK!!!... ---Beth & Andrea

...Just got back from the show here in Lincoln, it was a blast. There were about 5000 people in the auditorium, all ready for the Weez. AM Radio and Pete Yorn did a pretty good job, though I could barely hear what Pete was saying with all his mumbling. People should really give those bands a chance instead of just dissing them. This is my 4th Weezer concert since 2000, and I must say this was the best I've ever seen them. Scott was very energetic, and as I've been reading Rivers talked up a storm. Here are some highlights: "I hate to say I told you so....but...I told you so", "It's all about the cheddar." Then Rivers was having guitar troubles, "Aw the old Hand-off." "Nebraska girls are built tough, you guys are pussies....let's see some moshing people.", and then there was my favorite "You guys are rowdier than Ames(Iowa)....but you smell worse." We loved some of the change ups in Only in dreams, and Buddy Holly gave us goosebumps. I hope the band keeps up their level of energy, cause this was the most rockinest I'd ever seen. Long live the Weez!! I almost forgot, on that last guitar thrash finale, I swear I could see through time!! With all of those lights, and the pulsating...damn! It was awesome. Props to all... ---Dave and Lacey

...I woke up this morning and listened to Susanne to get myself up. It didn't take long to get fired up for the concert. At the concert, the sombrero was everywhere. It hit Pete Yorn in the face, he smiled and threw it back. He rocked, the crowd really seemed to like him. Pat wore the hat two different times in the set, both times afterwards he tossed it back to the crowd. When Rivers finished the intro, he said, "I told ya so, I told ya so." He had comments like this all night, so random, it was great. This concert and entering Wrigley Field are my greatest moments. This had to be the only concert ever that a mosh pit started during the cover of "Happy Together." I was surprised when they played "Modern Dukes." This show was awesome to say the least. They rocked Lincoln. ---Erik K, Lincoln