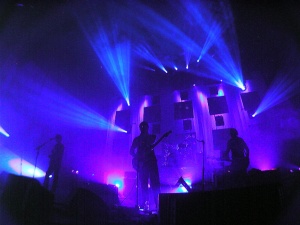 On May 8, 2002 Weezer performed in Colorado Springs, CO at the City Auditorium on the Dusty West Tour in support of Maladroit. The opening acts were AM Radio and Pete Yorn.


...we rolled into cozy Colorado Springs, and suddely things were a lot less wild. The weather was normal, the people were chilling, and this historic western town was just doing its thing, be it selling Tibetan imports, drinking Starbucks coffee, or playing hackey-sack. Today's show was in the smallest venue of the Dusty West tour, a sort of mini-arena/maxi-theater that held about 3500 people. It sort of felt like doing a show at a high school gym/auditorium. Backstage there was all sorts off odd props from various plays and musicals. This was the first weezer show in Colorado Springs, but we had reports of people coming in from Denver, not to mention Utah! The 'mush pit' got particularly hairy, with moments of mass chaos when multiple people decided to crowd surf at once.

...my friends and I had to sneak out since we're cadets at the Air Force Academy and we don't have permission to leave on weeknights. When we got to the show AM Radio was playing and they did pretty good. Pete Yorn came out and rocked the hiz-ouse but then WEEZER brought the walls down. They were really solid and played an incredible set. My friends and I had to leave early to get back to the Academy but our time spent at the show was well worth it. This was my first time seeing weezer and it won't be my last. Amazing show guys, and please come back to the springs! ---Steve

...I just got back from the Weezer concert in Colorado Springs and it was awesome! Both AM Radio and Pete Yorn were really good and did a great job warming us up for Weezer. When Weezer came out all of my friends and I went insane! I can't believe all of the songs that were played! El Scorcho was great and Only In Dreams was so amazingly wonderful and I can't get enough of Say It Ain't So! They ROCKED!!!! I went to a Weezer concert last year in Denver and that doesn't even compare, they whole group is sounding awesome together. Scott is amazing! It was by far the best concert I've been to this year, I couldn't quit jumping I was so happy! Weezer knows how to Rock! ---Ashley D.

...the show in the Springs really rocked. AM Radio sounded good and Pete Yorn really knows how to rock out. All of my friends in the front row thoroughly enjoyed the pleasure that was given to us by Weezer. We were all stoked about the Blue songs and Pinkerton songs that were played. Only in Dreams was spectacular. I also loved the short witty comments that Rivers made throughout the night. My friend and I had previously been to a Pete Yorn concert and had "after show" passes and we met him. Well we took these passes to tonights concert hoping they would allow us a chance to shake hands with such great musicians. We made it through all facets of security only to be rejected by some big british guy who opened the final door and we could see Pat and you in the lounge. Oh well. It was a good time! ---Aaron and Scott

...I just returned home from tonight's show. The audience was energetic, AM Radio and Pete Yorn absolutely rocked, and Weezer was nothing short of spectacular. The set was very nicely laid out and I was ecstatic to hear an abundance of Pink, and the Happy Together cover was executed really well. Rivers, I might add, was cuddly as ever with his beard and great lines. (Standing out in my mind would have to be, "Sometimes you feel like a nut, sometimes you don't.") ---Curt W