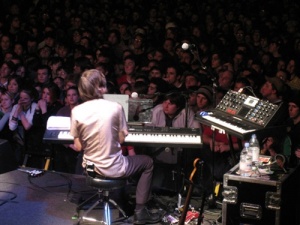 On May 8, 2005 Weezer performed in Boston, MA at The Avalon on their tour in support of Make Believe. The opening act was Ringside.

...the rough weather continued today up in Boston, putting a damper on things but not stopping the rock. Weezer has been at the Avalon at least 5 times in the past, and its always been an epic time. Its always fun to share narrow little Lansdowne Street with the Red Sox crowd and their hot dog vendors and the strange street people. One dude was offering his rendition of John Lennon's "Woman" alternating with his memorized renditions of various gangsta rap songs. Needless to say, the videocamera was on for that guy.

The line up started about 12 noon according to the first people in line, which is later than some of the recent shows, but still at least as heroic when you consider the cold rain and howling wind they had to endure all afternoon. No new illness to report, Scotts just about cleared up and no one else is showing symptoms. (I, however, feel like a wet napkin.)

Pat rolled in from the airport after his Upstat NY family day off and was immediately recruited for a pair of interviews, with local stations WBCN and WFNX.

This crowd was so hyped, they sang along during all the songs including the brand new ones, and was chanting 'wee-zer!' and shouting out 'we love you!' between nearly every song. The sing along during "My Name Is Jonas"! was unbelievable, one of the loudest Ive ever heard. Then, post show, what they call a "disco load out", as the crowd was cleared and the crew packed up under techno music and a disco ball for the Avalons second show of the night, Gay Night.

'Sup to the peeps in line, i was supposed to give some individual shout outs but i forgot your names! Sorry, im not all there today, the headcold took hold big time!

In attendance: Ivan the not terrible, and Mark K. aka DJ Carbo. Plus a lot of family/friend type post show peeps.

And hey, what is up with dissing Ringside (the opening act?) Im sorry, but thats just not cool! Flipping a band off or booing because you either dont like their music or are impatient for the headline act is shameful behavior - I dont care if you are hyped beyond recognition, over-toxicated or just a rude person in general - get a grip, yo! Its a concert, open your ears and check out whats on stage. Ringside works hard and a lot of people dig them. If you cant deal, at least be polite about it. An Avalon attendee says: "My group of buddies thought [Ringside] were really great. We enjoyed their performance, thought they had a great "new sound" and were upset at how atrocious the crowd was to them. We wanteeed them to know they they got through to some kids... we were really grooving."

First off, let me say--fantastic show. Me and my friends met you outside, where we tried to give you cough drop so that you would let us in to the concert early. We also discussed what was going on AFTER the show at the Avalon (I regret not being able to stick around). But, I digress--Back to the Show. Ah, it was great. Tired of Sex proved to be a great opener. Every song was near perfect and everything sounded great. BvH and WAAOD sounded a lot better live and HYED was ridiculous. It seemed like there was no place where you couldn't get a good view of Weezer seeing as it was such a small venue, although I must say my friends and I found an excellent spot. Rivers seemed to be into it alot more than I would have thought, although he still could have used more energy. It was a very special and intimate concert of which I'm happy to be apart of. ---Sean D.