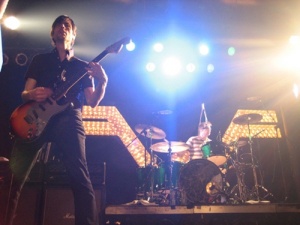 Brian and Pat in Hamburg.

On June 5, 2005 Weezer performed in Hamburg, Germany at the Grosse Freiheit on their tour in support of Make Believe. The opening act was The Subways.

......MB '05 Tour: Day 26: Hamburg, Germany - Grosse Freiheit.
Finally, back in Hamburg! While pouring rain put a crimp in the walking around plans (but could never prevent repeated visits to the nearby hauptbanhof for snacks and presse internationale), everyone was excited to finally make it back to Hamburg for a long overdue club show that was cancelled in late 2001. Today weezer played at Grosse Freiheit ("general freedom"), which is really just the name of the street in the Reeperbahn that the club is on. But Grosse Freiheit has a cool secret (well, not really a secret): it is actually combined with the Kaiserkellar, one of the Hamburg Reeperbahn clubs where the Beatles started their career back in 1960! In fact(?), (so the legend goes), the tiny production office where Stuart the tour manager and Arthur the production manager were set up tonight was once the very dressing room that Lennon, McCartney, Harrison, Best and Sutcliffe used before walking down the underground passage to rock out the basement Kaiserkellar club! The Kaiserkellar is also where John and Paul first spied Ringo in another band and started laying their plans to get him into the Beatles instead. The Kaiserkellar is but one of 4 historical Beatles locations within just a block or 2 in the Reeperbahn.

Weezer's stage was upstairs in the main Grosse Freiheit room, and the energy was insane! The crowd went bananas and the heat from the bodies and the giant "w" light combined with the smoke (its legal to smoke in clubs in Germany still) and sweat to make quite a potent (if overwhelming) rock stew. Kudos to Lightnin' Leif (taking over for Dan the lighting man who had prior engagements), who devastated the place with a light show that matched the raw energy in the room. 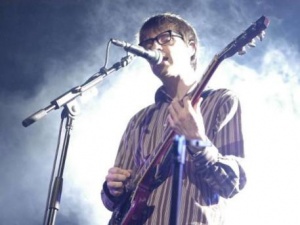 I have been to the concert in Hamburg yesterday and I must say that was really fantastic - "monster stark"!!!!!!! I have been to a lot of different concerts and festivals, listen to famous bands like "Rage against the machine, red hot chili peppers, the prodigy..." but nobody makes that kind of music which really rocks. So, in my opinion weezer is the best band I ever listen to. The new kings of rock! And the new album "make believe" is sensational. We need more of this stuff. Viele liebe Grüße aus Kiel. ---Beimi

My first weezer show ever! (ok I also had a ticket for the show in Cologne in October 2001 but ... you know ... and I had to wait almost 4 years to get a second chance.) It was absolutely AWESOME and I am still excited. (And I will probably stay a while excited and annoy all the people around me with talking about it.) In the first 10 or 15 minutes I had to realize for myself that this all is really happen and I am really on weezer show and can see them live. Have you seen the italian fans with the banner? They probably win the "I-am-the-fan-with-the-longest-journey-to-destination"-contest. My 260 km (and 260 km back) are nothing against that. Respect! ---Sylvia