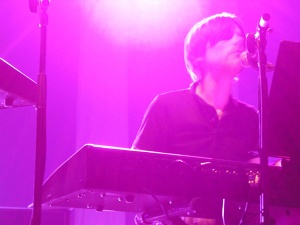 On June 15, 2005 Weezer performed in London, UK at the Brixton Academy on their tour in support of Make Believe. The opening act was Tegan and Sara.

...MB '05 Tour: Day 35: London, UK - Brixton Academy #2
Back down for another night in Brixton! Todays show was the only club show of the tour that didnt quite sell out, so there was a bit more elbow room out in the crowd. This may account for a slightly more relaxed vibe tonight, though there was still plenty of loud-as-hell singalongs going on and more than a few crowdsurfers doing their thing. All told, over 8500 people got rocked these 2 nights in London, which is phenominal. Thanks to each and every one of you who came, and that goes for everyone on the whole Euro-tour as well, including those who havent yet seen the show - up in Glasgow in 2 days time. Its really been such a pleasure for everyone this time over, and that bodes very well for repeat visits down the line.

Tegan And Sara opened again tonight, killin' it! They said some very kind words tonight about weezer, relating a very nice 'rockin out in the bedroom playing air guitar to weezer songs back in junior high' tale. After the show the weez-men finally got a chance to sit down and thank the girls and their band for joining them for these shows.

Random side note: enroute to the Academy, we were pleased to see the Battersea Power Station, famous for being the location for Pink Floyd's "Animals" album cover photo.

Just wanted to say a big thank you to you, and the of course all the guys for such an awesome set of shows. I was lucky enough to get to go to all 3 shows this week and it was well worth it. Last night was incredible, Rivers looked totally involved, especially during “Haunt you everyday” and the finale with guitar held high above his head, truly everything you could ever want to round off a show. Scott has perfectly slotted into the band now, and I really can’t imagine them without him, never thought I’d say that! ---Rich =w= 3986 - slobulike

I attended the Paris concert and had already been amazed of how accurately the band had played all the songs. This feeling has been even more emphasized yesterday in London. Hot hot Brixton Academy !!! From "Tired Of Sex" to the second encore "Hash Pipe", it's been the same pleasure as enjoying the sound of Weezer records played live. Perfect setlist, perfect interpretation ... perfect situation. I can't think of any mistake done in any of the songs. Rivers' voice has never been so powerful and clear. Think of any drum or guitar detail in any of the songs you're so keen on the records, and it's right here, right at the same moment in the song, so that fans can mime or play air guitar (if not Air Weezer) along the whole concert. The more the band plays the songs of the latest record, the more I learn to assimilate them as genuine Weezer pearls. For instance, "This is such a pity" was definitely not a pity, rocked out like I couldn't think they'd ever be able to do it live. Obviously, a difficult sentimental break-up is definitely not the best thing to go through when you attend a Weezer show as "Hold Me", "Haunt You Every Day" tend to bring tears up to the eyes of many (mine as well). Rivers has probably said one of his longest sentences ever formulated at the end of the show, and took his best rocker posture at the end of "Hash Pipe" as a huge "thank you" to his English fans. No. Thank YOU guys. The more I see you, the better you are. Can't wait to see you again and again. ---Thomas Vandenberghe, former editor in chief of Rock Sound mag.