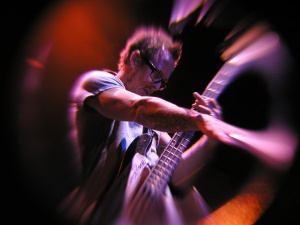 On July 11, 2002 Weezer performed in Chicago, IL at the Tweeter Center on the Enlightenment Tour in support of Maladroit. The opening acts on the main stage were Sparta and Dashboard Confessional. Loudermilk, Home Town Hero and AM Radio performed on the side stage.

Well, at last the main stage and side stages have been reunited at one location. Now, concert goers who'd rather not sit around waiting for the next main stage act can step over to the side stage, grab a soda and check out some cool new bands. Its a non stop music marathon, for all to enjoy. Okay, that was sappy. But it is pretty cool, having up to 7 bands playing one show! Tonight was the first gig of the tour with no "mosh pit", as the seating went right to the stage. Fortunately the crowd was pretty hyper anyway, and the energy flowed the wqay it ought to. Both Sparta and Dashboard have been turning in really solid sets, and it looks like the crowds are pleased with what theyre seeing. We're starting to settle into an Enlightenment groove!

Tomorrow in Detroit, there will be the first fan-weez foosball challenge, before the show! In most cities from Detroit onward, the local radio station will be choosing winning fans who get to come backstage before the show and challenge the band to a mini-foosball tournament! 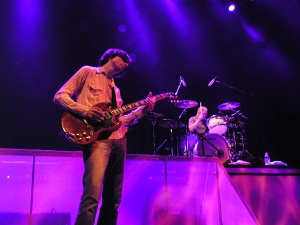 ...Gotta say thanks to the band for putting on an excellent show! I didn't expect for them to pull out so much Pinkerton...kickass treat, yo! The pyrotechnics display was breathtaking. haha. I'm so giddy, my hands are shaking whilst I'm typing. Rivers was so cool with his whole suit and sunglasses look. Rivers ruled the school with his guitar solos. Righteous. Oh crap! Happy birthday to Scott! I hope it was good one! Pat was beating the stuffing outta his skins! I wish the Special Goodness had played here. Oh well. Brian kicked all sorts of ass on the geetar. Brilliant show, dudes. BTW, I'm in deep *** with my Mom. She bailed my and my two friends asses from freakin' Tinley Park. We're originally from the city. Thanks again, weezer. ---Anna.

...Tonights show was awesome! We couldn't have asked for a better set list! Jonas, Butterfly, Say it ain't so, no one else, the good life & el scorcho...........just to name a few. And when Rivers said "Come on little pedal, lets make some noise" he wasn't lying. Rivers, Pat, Scott and Brian rocked the house! Hopefully we were as good to them as they were to us. Rivers was funny as hell too, sending hashpipe out to all of his "peeps" or when he took it old skool with "You better check yourself, before you wreck yourself". Dashboard Kicked ass too! And after their show the bass player and guitar player came and sat right next to us! Oh and before the show we saw pat riding his bike around the arena (at least we thought it was pat) And even you walked right next to us in your light blue shirt!!! Wow karl you're famous! This was our first Weezer show and definitely not our last! As a matter of fact were going to the indiana show next week!!! And we couldn't be anymore stoked!!!! C-ya there!!! ---Mary and Andrea