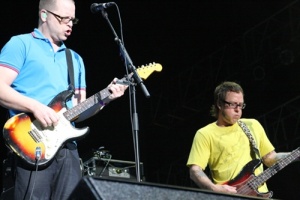 Pat and Scott in Korea.
On July 24, 2009 Weezer headlined the first day of the Jisan Valley Rock Festival which was held from July 24 - July 26 at the Jisan Forest Resort in Korea. The songs "The Girl Got Hot", "I'm Your Daddy" and "Can't Stop Partying" were played live for the first time.

...after a series of adventures out in Seoul involving the fine establishment of Kraze Burger (in the cool Apgujeong-dong district) and some 600 year old royal burial mounds at Samneung park, it was time to get back in the super van and head up to the mountains to The Jisan Valley Rock Festival, held at what is normally a ski resort in the wintertime. This was the inaugural Jisan Fest, so there was a lot of speculation as to how it would go. Turns out they planned it out well, and everything went about as good as can be expected for a huge outdoor festival.

The crowd was just completely CRAZY. They have been waiting since forever for the weez, and the excitement in the air was thick! They sang along with every song, even the 3 brand new ones (The Girl Got Hot, Can't Stop Partying, and I'm Your Daddy). Granted, these songs are almost designed to sing along to, but it was pretty impressive that the crowd picked up on them so fast, especially with the language barrier.

The crowd was also treated to the classics, including Undone, The Good Life, My Name Is Jonas, Say It Aint So, and Buddy Holly. Between those, the newer tracks like Pork And Beans, a cool "demo demonstration" rendition of "Island In The Sun", and a special selection of mashed-up covers and Korea-specific material, the overall effect was pretty epic. The 5 piece configuration is working out very well so far, with Josh Feese handling many of the drum duties, freeing up Pat to jump in on guitar and vocals, which frees up Rivers to do his thang, which he is doing quite well. Korea, we shall return! 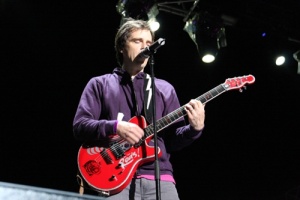 Rivers in Korea with his "Go Reds!"-guitar.

A custom made guitar, featuring the flag of Korea and a shout out to the Korean national soccer team (called "Reds"), was built for Rivers by Kraken Guitars especially for this performance.