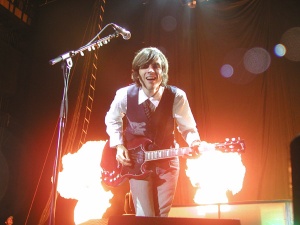 Brian Bell performing in Camden.
On July 26, 2002 Weezer performed in Camden, NJ at the Tweeter Center on the Enlightenment Tour in support of Maladroit. The opening acts on the main stage were Cordalene and Dashboard Confessional. Rooney, Home Town Hero and AM Radio performed on the side stage.


Today was a record breaking historic show for the weez, as nearly 15,000 people came to the Tweeter Center to see the concert, and thats the most people ever to attend a headlining weezer show! That beats out both last fall's massive United Center [Chicago] and Jones Beach [nyc] shows! Thank you Philadelphia for showing the world that you are the champions of weezer fandom! It was simply epic in scale and really made you sit back and go "mmm". Meanwhile, lots of people were commenting on the strong debut performance of Enlightenment newcomers Rooney over on the side stage. And one time Main Stagers Cordalene came in today and put in a terrific show.

"Weezer World Cup" Foosball Challenge #6: Philadelphia- Y100
Foosball Challenge #6! Today before the show there was another fan vs. weez foosball challenge. In many cities on the Enlightenment Tour, the local radio station will be choosing winning fans who get to come backstage before the show and challenge the band to a mini-foosball tournament! [your local radio station should be talking about the contest, if theyre not, then its not likely to be happening in your area]. There are usually 6 winners per show, and they divide up into 3 teams who face off vs weezer for one game each. 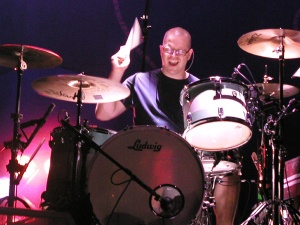 ..Hope you get this. An incredible show tonight. It was my seventh show (2 Blue, 2 Pinkerton, 1 w/ No Doubt, 1 Midget) and I never thought it could beat those two shows in 1994 and 1995 at First Avenue in Minneapolis. All I can say it blew me away. The greatest weezer performance I've seen by far. Rivers said they were going to kick our ass and they did. The mix of Pinkerton tunes plus seven from Blue? Amazing. It's the first time in seven years that I've heard Only in Dreams live. Also, Dope Nose knocked the place down. After a rough move to the East Coast, all I can say is thanks to the band. Thanks for taking me back to senior in high school and making it an amazing night. Not a complaint, but a suggestion since the band seems so much more confident and risk taking than ever...how about The World has Turned? Thanks for listening and also for all your work on the website. You were the lifeline for those years. And, I think it was you, but the memory is fading, I think you gave me a setlist at Target Center in 1997 on the No Doubt show. Thanks. The Rock Lives. ---Kyle

...Thank you guys so much for playing such an amazing set. I hope you know how much it means to so many people that you are playing the Pinkerton songs again. I was at both New Jersey shows, and that means I got to hear 7 Pinkerton songs... Tonite, the best song was No Other One. The show was amazing... The Pyro, the =w=, Rivers talking, etc. But what really made it incredibly special is that we finally get to hear our favorite songs from or favorite album by our favorite band. Thank you so much! Rock and Roll! ---W.

A recording of "Burndt Jamb" from this concert appeared as a B-Side on the "We Are All on Drugs" Single and as a bonus track on the Japanese version of Make Believe.