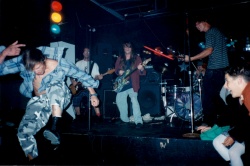 Weezer played a three-show tour in northern California in August of 1992. It was the band's first time performing outside of Los Angeles.

Weezer performed repeatedly in the same five Sunset Strip rock clubs for their first six months as a band. Though these shows introduced them to like-minded groups like Wax - as well as future fan club founders Mykel and Carli Allan - the band struggled to gain much of a following. In a 1995 interview with the LA Times, founding bassist Matt Sharp described their early audiences as “the same five to 10 friends who would show up because they felt guilty."

The offer for their first tour came through original guitarist Jason Cropper. As recounted by band historian Karl Koch, Cropper's former band The Brotherhood Groove Grand Junction had booked a gig at "an outdoor party" in the rural logging community of Gureneville, CA and had "invited Jason to bring his "new band" up to play." Weezer booked two additional gigs to fill out the trip. The first, on August 13, was at "a smallish bar/live entertainment place in San Jose" named Marsuggi's. The other was at The Power Station in Eureka for an "an all metal band revue" on August 15. Koch served as chauffeur for the trip, driving the band nearly 350 miles in a "Bronco II with a U-Haul trailer."

Between the San Jose and Eureka shows, the group of five arrived in Berkeley, CA without a gig scheduled. In Koch's words, they proceeded to "just show up at bay area clubs until they got added to a show." They tried asking for stage time at three distinct clubs - including the "Gilman," a venue that helped launch Green Day, The Offspring, Rancid, and other bands - but they were turned away each time.

Footage of "My Name Is Jonas" from the Eureka and Gureneville shows was eventually released on the 2004 DVD Video Capture Device.