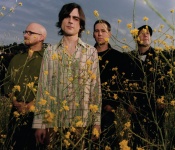 Space Twins was founded in 1993 by Weezer guitarist Brian Bell and, his then girlfriend, Susan Fox. Initially, the band was a small project in which the two would dress up in Star Trek style outfits with pipe-cleaner antennae, playing silly songs at kid's birthday parties. The duo even had nicknames for one other: SpaceHelmet and Moonboot.

In 1996, the project became more serious, and Bell was joined by high school friends, Tim and Glenn Maloof. Bell also brought Mike Elliot into the fold, and, thus, a new Space Twins line-up was solidified.

The quartet developed a unique sound that blends modern indie rock with progressive and psychedelic elements. In Weezer's down-time, the band released two limited-edition 7" singles: Osaka Aquabus (1997) and TV, Music & Candy (1998). Both of these sold out quickly and are no longer in print.