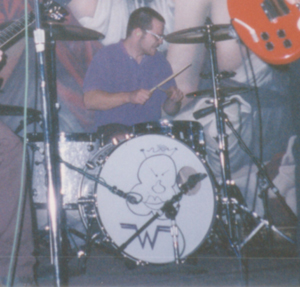 Pat playing his new (at the time) Drum Workshop (DW) kit in Marine Pearl finish with the Bokkus drum head adorning the front.

Patrick Wilson's Equipment has gone through many changes over the years, this page exists to list in detail the equipment that's been used in the past and present. Much of this article is derived from the old Weezer Equipment History Page on Weezer.com and was originally written by Karl Koch.

When Weezer formed in early 1992, Pat had a 3 piece Ludwig drum kit. This was a black kit with red blue and green paint swirls, and dated from the 70's. The kit had a 22" bass drum, a 16" floor tom, and a 14" Ludwig Supra-Phonic snare that was silver and had some really lame permanent maker graffiti on it of "Peace and Love" with accompanying peace symbols. Pat still has this drum now. Sometimes Pat would add an old set of Rototoms, but this practice faded with time. He used 14" hi hats (mismatched Zildjian and Paiste), an 18" Zildjian crash (severely cracked), and a huge china crash (also cracked) that had to be one of the loudest cymbals ever made. The ride cymbal was a Paiste 2002 which was praiseworthy for its cool bell sound. His kick drum pedal was a rough old DW5000 that always seemed to be falling apart. The hardware was a mismatched smorgasboard of Ludwig and other brands in bad shape. As weezer played shows around LA in the spring summer and fall of 1992, this drum kit remained mostly unchanged except for some minor hardware changes and cymbal replacements. Pat started shredding crash cymbals, and kept having bad luck with the replacements he bought. The old 'china boy' finally cracked to uselessness. It was too expensive to replace, but Pat did experiment with a small strange china/crash called the "roar of the dragons wind" or something, Which was so poorly made that it cracked within 10 minutes. Pat soldiered on with it for 3 shows, whereupon it split right in half in the middle of a show at the Gaslight, thereupon sounding kind of like a car crash everytime he hit it. Pat delightfuly stomped up and down on it at show's end. This black kit is pictured inside the Blue Album booklet in the garage where it did most of its duty. This kit is the kit heard on "first" demo tape, the "Kitchen Tape" demos, the "November '92 official demo tape", and countless other demos and recordings from 1991-1993. The black kit has recently [2002] been recovered from a 4th party by karl, and has been fixed back up to usefullness.

in July 1993 Geffen was kicking down for new equipment in preparation for the upcoming Blue Album sessions in the fall, so Pat went out and got a new kit. Pat's new kit was a new Drum Workshop (DW) in Marine Peral finish. This kit had a 22"x18" bass drum, a 16"x14" floor tom, and a tiny 13" rack tom (later returned and then later still re-bought!), and a 14"x5" Ludwig Black Beauty snare. Pat got a set of Zildjian "A" cymbals, though he held onto the trusty old Paiste ride for a while. This is the kit as heard on the Blue Album. The DW kit was sold to Shufflepuck, who contained now-current members of both Psoma and Roosevelt. Its current wherabouts are unknown.

Story of the "Bokkus" drumhead: I have located 4 pictures that show the evolution of the drum head that was to appear in the garage photo in the Blue Album. Top Left: Aug '93: Originally Pat drew the "Bokkus" Character on the backside of the drumhead while recording the Blue Album at Electric Lady. The photo shows the head hanging on the wall as decoration. Top Right: Sept. '93 Pat decides to use the head, but Bokkus is on the wrong side. This enhanced photo emphasizes the 'hidden' Bokkus. Bottom Left: Nov. '93: A classic "Weezer W" is added. Bottom right, Dec '93: Pat traces Bokkus on the outside of the head, only to discover that the hole cut to accomodate microphones is right where Bokkus' pipe was, so the pipe is squashed below the hole. this leads to people thinking Bokkus is blowing a big bubble out of his pipe. Note that the photo of the garage was taken after the DW kit was purchased, so the Bokkus head had to be put on the original black kit for the photo.

Later in 1994, Pat picked up a green brushed aluminum Trick brand 14" snare drum. We were under the impression that Trick had since gone out of business, but apparently they still are going. Anyway, the snare sounded awesome. Pat sold it (on ebay no less!) in mid 1999.

In 1996 Pat got a new Ludwig kit directly from Ludwig. This was a full double bass drum set, a Super Classic in Champaigne Sparkle finish, that he broke into a "big" and a "small" kit. The small kit stayed at home, and is heard on the first Special Goodness "bunny cover" album, and later went away somewhere. The big kit was used on "Pinkerton" and was used for all the touring in '96-'97. This kit went away as well.

I remember using Ludwig Classic drums in all the standard sizes. I tuned the bottom heads a 5th higher than the top which I think had an impact in the sound. I forget what room we had at Sound City but it's the one that had Arkanoid in the lounge. Really, it's all the same bs. Gibsons and humbucking Warmouth Strats into Marshalls. The bass was Warmouth with Schecter pickups played through Orange and Matamp amps cranked. I can't remember all the mics but Joe Barresi had a NTI EQ3 post compression on some drums. It was mixed I think mostly by Jack Joseph Puig but I wasn't there. I only went over to Ocean Way once and was astounded with all the equipment in his studio. (Haha, I just Googled "air band eq night technologies" and a thread by JJ came up).
- Patrick Wilson, ProSoundWeb Forums (April 04, 2007)

Blue 70's Vistalite drums. [This would be their last tour]. At this point, Everyone switched over to an in-ear monitor system, where tiny wireless headphones are worn by each band member, through which a custom mix is pumped, depending on what the band member requires. This eliminated the need for monitor wedges all over the stage, which made things a lot easier during the Hooptie Tour with its tiny stages. The band has fallen in love with the system (also after major uncertainty and doubts), as they get a much more consistent sound night after night. Monitor wedges can sound very different night to night depending on the stage and electronics in use, and can "feed back" at inopportune times.

Pat got a new Ludwig kit in "Psychedelic Red". This kit has a very similar look to his original Black ludwig kit from '91-'93. The Ex-M tour was overall the same.