"Are 'Friends' Electric?" is a song by Tubeway Army, an early project of Gary Numan's. Weezer's version on the "Pork and Beans" single is a live recording, from the Make Believe Tour show on October 29, 2005 in Fresno, CA.

The original Tubeway Army version is from a 1979 album called Replicas. The titles of both this song and the album are influenced by the Phillip K. Dick science fiction story Do Androids Dream of Electric Sheep?, which was also the basis of the 1982 Ridley Scott film Blade Runner.

The song tells the tale of a lonely and paranoid man; its themes of alienation and isolation were a Numan hallmark at this time in his career. The lyrics were inspired by a failed relationship with Beggars Banquet employee Susan Wathan (cryptically referred to as "S.U."). Despite being over five minutes long and possessing, in the words of its composer, "no recognisable hook-line whatsoever", the single topped the UK charts and is notable for being the first electronic/synthesizer-based record to become a hit in the post-punk era.

"Are 'Friends' Electric?" features three different sections: a recurring 'verse' with synth riff in C and B flat, a recurring section with spoken word over slow arpeggiated seventh chords, and an instrumental break in F. The instrumentation is quite minimalistic: there is a conventional drum and bass guitar backing track, some additional heavily flanged guitar (particularly in the instrumental break), subdued vocals and, most prominently, Minimoog synthesizer. These synth parts include a slow-paced sawtooth bass riff, and some soaring portamento background lines. 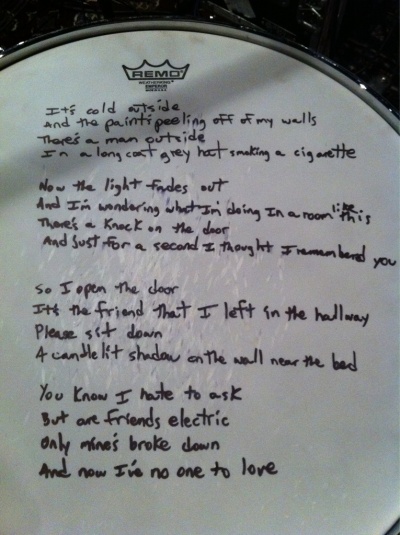 Lyrics written by Pat Wilson on a snare drum with a Sharpie.

It's cold outside
And the paint's peeling off of my walls
There's a man outside
In a long coat, grey hat, smoking a cigarette

You know I hate to ask
But are 'friends' electric?
Only mine's broke down
And now I've no-one to love