On May 2, 2011, Weezer guest starred on MTV's teen sitcom, The Hard Times of RJ Berger. The show is set in a fictional Ohio town, where the high school characters attend Pinkerton High (so named after the band's 1996 album, as the creators, David Katzenberg and Seth Grahame-Smith, were fans.) 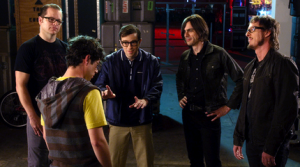 Rivers about to grant RJ's wish

In the episode titled "You, Me, and Weezer" (Season 2, Episode 7); RJ tries to impress his tutor, Amy, by getting them into a Weezer concert, as she is a big fan. The entire band play fictionalized versions of themselves to hilarious effect, and they all have a few lines. "El Scorcho" and "Hang On" (which was new at the time) are performed.

At about 14:27 into the episode, the band is seen playing "El Scorcho" on a stage set up like a real concert.

Cut to backstage where RJ has decided to try and sneak in, but is caught by a large security guard, who tells him to stay out. Just then (at about 16:12) the band waltzes in, catching the tail-end of RJ's plea with security:

Scott: Whoa, whoa whoa, hold on man. Philippe, hold on a second man. Kid, you broke in here just for a girl?

RJ (stammering): Yeah and, and she is your biggest fan, and this concert would mean the world to her and and to me, and and and to us

RJ: It's just, ah you know, a girl like that doesn't pay attention to a guy like me very often.

Rivers: Well RJ Berger, I understand what it's like to be that guy. On the outside, I may look like a rock god; but on the inside I just want to play with my ants in my ant farm.

Brian: I still wet my bed.

Scott: I love dressing up like a little girl.

Rivers: See? We're not that different from you.

RJ: Wow that's really awesome, so maybe now you can let us in??

Rivers (hesitating): Uh sorry kid, you're underage, it's illegal for you to watch the show from the audience...

Rivers: SO, you'll have to watch the show from the side of the stage!

Rivers: Philippe, get my boy some wristbands!

The band then goes back onstage to a cheering crowd, and Rivers makes a dedication, "I want to dedicate this song to nerds everywhere! RJ and Amy, this one's for you" as he points to the side of the stage, where RJ, Amy and their friend Miles are freaking out. The episode closes out with the band playing "Hang On", as RJ and Amy kiss.

A behind the scenes look that was originally released on December 21, 2010