From Weezerpedia
(Redirected from =w=)
Jump to: navigation, search 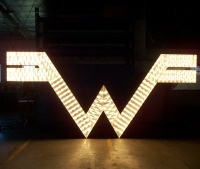 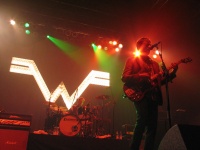 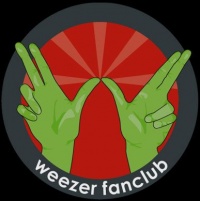 The Flying =W= is an iconic Weezer logo. The famous Flying =W= was designed by Patrick Wilson during the making of Weezer's third demo, when he and Karl Koch were 'drawing' by dispersing fuzz that had collected on the studio walls. They found it amusing, and Koch reproduced the logo onto the back of lead singer Rivers Cuomo's jacket using the engineer's labeling tape. Supposedly, Cuomo wore it around LA until the tape fell off. It is a simultaneous homage and spoof of Van Halen's classic logo, which featured 'wings' protruding from the band's initials "VH".

The logo was 'officially' employed immediately, and Wilson applied it to his drumhead, alongside Bokkus. It appears on a wide array of merchandise, including CDs, T-shirts, and more - including this website's logo. An offshoot of this logo was created in conjunction with the band's appearances under the moniker Goat Punishment. The wings were attached to the G and P to form =GP=, and featured on a limited run of Goat Punishment T-shirts.

The band designed and built a large metal =W=, with a pattern of light bulbs attached, that was utilized at shows, behind the band, while on stage. There have been a total of three Flying =W= lighting rigs. The first was crafted for club-sized venues at the outset of the band's Blue-era touring. As the band was thrust into superstardom, and the size of the venues increased, a second, larger rig was fashioned. It was eventually retired and replaced with a better-made model. The retired rig is now enshrined in Cleveland's Rock And Roll Hall Of Fame. Additionally, a fourth rig exists - a smallish Flying =GP= lighting rig was commissioned for the band's run of Goat Punishment shows at small venues.

Weezer fans, in the band's early touring days, were known to flash a "W" during shows as a tribute to their heroes - almost as much as applause. This is achieved by touching the tips of one's thumbs at an approximate 90 degree angle, and pointing the index fingers outward at 90 degree angles, to form a W. In the years since the band's triumphant return to form in 2000, this tribute evolved to include one's middle fingers also pointing outward, parallel to the index fingers, in an effort to simulate the wings of the Flying =W=. A depiction of this was used as the band's Fan Club logo upon its relaunch in the early 2000s.