From Weezerpedia
(Redirected from Across The Sea)
Jump to: navigation, search

"Across the Sea" is the fifth track on Pinkerton.

"Across the Sea" is one of the most emotionally charged songs in the entire Weezer canon. Rivers Cuomo wrote the song while attending Harvard University, and it is has been cited as one of the key turning points Cuomo experienced when deciding to go forth with the concept for Pinkerton in place of Songs From the Black Hole.[citation needed]

Cuomo wrote "Across The Sea" after receiving a fan letter from a Japan. A young girl wrote to him, asking several questions about his everyday life during the depressing winter he spent at Harvard University in 1995. On his relationship with the girl, Cuomo remarked, "When I got the letter, I fell in love with her. It was such a great letter. I was very lonely at the time, but at the same time I was very depressed that I would never meet her. Even if I did see her, she was probably some fourteen-year-old girl, who didn't speak English."[citation needed] When asked in 2006 about the girl, he commented, "I don't know anything about her and I've never contacted her."[citation needed]

The lyrics to the song's opening verse are taken almost verbatim from the fan letter. At the time of release, Cuomo claimed that the anonymous Japanese fan received royalties for the song.[1][2] Due to more recent statements made by Cuomo, it is unknown if this is true. The lyrics also make mention of Cuomo's adolescent consideration of becoming a monk to win the favor of older women, as well as the idea that his mother is responsible for his romantic shortcomings.

In the beginning of the song, while the piano plays, the sounds of a door opening, drummer Pat Wilson laughing, and several random notes being played on a nylon guitar can be heard. The piano instrumental has been said to symbolize Cuomo's depression while attending Harvard.[1] The song's guitar solo contains a relatively complex chord progression, during which the key modulates from G major to E major (the parallel major of the original key's relative minor). The following bridge remains in the key of E major, then modulates back to G for the final verse and chorus.

The song is also the namesake for the Across the Sea: Live in Japan concert video filmed in 2005 while on the Japanese Mos Burger Tour.

"Across the Sea" is considered by many longtime fans of Weezer to be one of, if not the best overall song the band has released. On the Weezer songblog, Teenage Victory Songs, Across the Sea was distinguished in "The Very Best" category of Weezer's discography.[3] Additionally, when members of the website AllThingsWeezer thread that asked fans to give the song a ranking out of 10, Across the Sea recieved a 99.23%, making it the highest-ranked song as of January 2010.[citation needed]

Across the Sea: Live in Japan 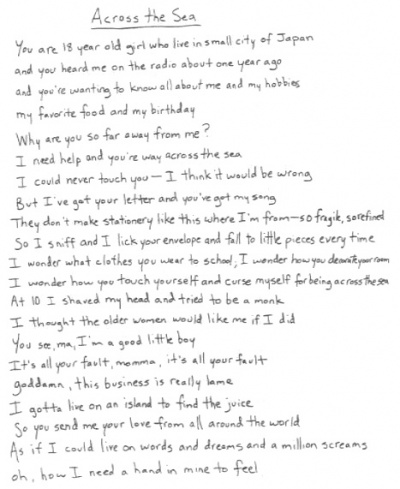 Why are you so far away from me?
I need help and you're way across the sea
I could never touch you - I think it would be wrong
I've got your letter - you've got my song

They don't make stationery like this where I'm from - so fragile, so refined
So I sniff and I lick your envelope and fall to little pieces every time
I wonder what clothes you wear to school; I wonder how you decorate your room
I wonder how you touch yourself and curse myself for being across the sea

Why are you so far away from me?
I need help and you're way across the sea
I could never touch you - I think it would be wrong
I've got your letter and you've got my song

At 10 I shaved my head and tried to be a monk
I thought the older women would like me if I did
You see, ma, I'm a good little boy
It's all your fault, momma, it's all your fault
Goddamn, this business is really lame
I gotta live on an island to find the juice
So you send me your love from all around the world
As if I could live off words and dreams and a million screams
Oh, how I need a hand to mine to feel.