Weezer: The Ballad of Rivers Cuomo 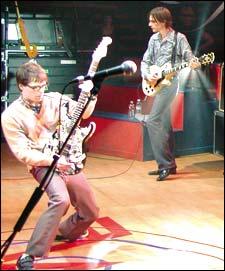 In the mid '90s, Weezer scored one for geeks everywhere with a string of shamelessly inane but fiercely endearing power-pop hits. In the five years since the release of the band's under-performing second album, its legion of fans has only grown more rabid. Prospects for the band's new album look more than good. So why isn't Weezer's frontman smiling?

Poor Rivers Cuomo. Imagine you're him, on stage at Roseland Ballroom in New York City, peering out through your thick-rimmed specs into a rabid crowd of 3,000 cooler-than-ice teenagers. They look nothing like Buddy Holly in their urban prep-gansta gear, but they chant the lyrics to your song about the glee of catching waves in the California sunshine anyway. "You take your car to work!" your voice cracks. "I'll take my board!" they bellow back. The song peaks as confetti drops onto the stage - decorated to look like the gym at a high school dance, basketball backboards-cum-projection screens included - and the makeshift rock 'n' roll high goes berserk. Some even raise their hands in the air, positioning their fingers to mimic the gigantic neon =w= sign flashing behind you, à la Van Halen.

Imagine seeing this scene in 30 cities during a sold-out nationwide tour, your first public outing, essentially, in five years. The fans have come for the old stuff, but your new shit sounds great next to the classics, which is not a coincidence, considering that your then unreleased new album takes an artistic turn back to the quirky, shimmering pop sensibility on which you made your mark. You've survived the loss of a founding band member as well as a serious and well-publicized bout of self-doubt and social seclusion, only to return to find that your music still connects with a new generation of youth gone wild. A bright outlook might be in order, especially since Ric Ocasek, the producer of your first handful of hits (including "The Sweater Song" and "Say It Ain't So") has returned to give your new tunes that same pop-perfect sheen that pushed double-platinum the first time around. But Rivers refuses to take the pat on the back.

"It's really nerve-wracking to play new songs for people when..you know they just really want to hear the old songs," he says, reflecting on his recent tour experience. "It's weird trying to compete with our past selves. When we're up there playing the old songs, it just feels like we're playing these classic hits that don't even necessarily belong to us. I am cautiously very proud of [our new] record, but I know I'm the only person who thinks that. I'm kind of used to huge disappointments when we put out records. Last time, 90% of our fanbase immediately abandoned us when we put out our second album, so I expect that trend to continue."

If a live-action Underdog ever makes it to the silver screen, Cuomo - whose terse sentences and long, painful pauses hint that he'd rather have a root canal than conduct this interview - would be a shoe-in for the role of the meek, self-depreciating Shoeshine Boy. But in a way, one can understand Cuomo feeling a bit overwhelmed in the presence of such audience adoration, and extremely hesitant about the potential of his band's new self-titled "green" album, its first under the Interscope Records umbrella.

For one, the half-decade hiatus has been the kiss of death to many a once-successful alternative pop band. Stone Roses couldn't find relevancy after five years on the shelf, and wild horses couldn't drag the Sundays back into the limelight after their time away from the airwaves. Plus, Weezer's last effort, the more aggressive and lyrically introspective Pinkerton, pretty much bombed, at least in Cuomo's eyes, selling less than a fourth of the "blue" album's 2.3 million copies. Yet, looking at recent attendance records and the early response to the band's new single, the kinetic and vivacious "Hash Pipe," the Californian quartet - completed by guitarist Brian Bell, drummer Patrick Wilson and bassist Mikey Welsh (replacing original member Matt Sharp who left to become a full-time Rental in 1996) - seems as popular today as they ever were.

"I think probably any other band who had slacked off as much as we had over the last few years would have totally lost their fans," Cuomo says, admitting he did little but surf the boob-tube during his time off and completed the recording of the new album in a mere month. "But our fans have stuck around and gotten more rabid than ever. We haven't done a thing to promote ourselves for so long, and it just seems like our audience is growing and expanding amongst younger people. I have no idea how it happened."

When pushed, he does offer one possible reason behind the band's lingering popularity: the advent of mp3 technology. "Through the internet, a lot of our technically unreleased songs have been distributed and traded between the fans, so it's almost like we've been putting out albums over the past few years. There's been a constant stream of 'new Weezer songs' that we never intended anyone to hear."

Score one point for Napster. But while the Net-savviness of Gen Y might explain why the kids didn't forget about Weezer, it doesn't answer how the band is still able pack sheds in this era of Backstreet and Bizkit with hardly any promotional push. Maybe it's the timelessness of their endearing honesty and effervescent hooks. Maybe their tales of growing up geek touch adolescents of any generation. Perhaps pop's pendulum is swinging back to the left, gravitating towards music that's less contrived than the overproduced pop flooding the airwaves. Or maybe the kids still recognize a killer hook when they hear it, end of story.

Whatever the reason behind the renaissance, the fact remains that Weezer's role as the misfits of the pop pantheon remains as vital as it was in the beginning. They're still the smartest kids in the class with the catchiest hooks, a swell contrast to the jock jammers and prom queens. And not even Cuomo can completely deny the band may, once again, find itself in the right place at the right time.

"We've always stuck out like a sore thumb," he says. " I'm curious to see what's going to happen. This record obviously does not fit in on the radio at all right now. But that could be a good thing. The same thing happened when we put out the 'The Sweater Song.' Everything at the time was grunge, and that song was just from another universe. People liked it because it was a change. And this album is from another universe as well; it sounds unlike anything anyone has ever written before, or ever will again, so maybe the same thing will happen again. Probably not though."