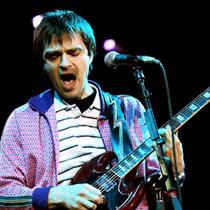 Saying Weezer frontman Rivers Cuomo isn't your typical rock star is the understatement of the century. The quirky singer once took a two-year vow of celibacy, has experimented with drug use to inspire his music ("Hash Pipe" was a combination of three shots tequila, one part Ritalin), ditched his band at the height of their career to study at Harvard and used to live in a one-room apartment with black walls and blacked-out windows. Now, the idiosyncratic songwriter is readying the release of another unorthodox project: a CD of demos entitled Alone – The Home Recordings of Rivers Cuomo featuring tracks that run the gamut of his career, including a cover of Ice Cube's "The Bomb" (yes, he raps) to songs from his abandoned space-themed rock opera, Songs from the Black Hole.

Perhaps what's stranger than the album itself is the fact Cuomo even wanted it released. At the time the singer was tracking the songs, he was terrified of people overhearing him and he often fixed soundproofing foam around him to set his mind at ease enough to allow him to create.

"When in the process of doing it [writing music], I can't stand the thought of anyone hearing something. It makes me so nervous," Cuomo gingerly explains. "A lot of times, I feel like I take a lot of chances and it's possible I'm going to sing something that sounds really silly or stupid."

The timid singer, who rarely grants interviews and has famously shunned the spotlight, is a bit paradoxical when it comes to people hearing his creations. He hates people to hear him while he's laying down his ideas but feels compelled to have the world hear them once they are completed -- hence Alone (in stores Dec. 18). Likewise, fame is a double-edged sward for Cuomo, who has written about his struggles in the spotlight but feels compelled to deliver his music to as big an audience as possible. He describes the process of having his private emotional expression become a public phenomenon as being "the greatest feeling in the world" yet can't stand to have people staring at him.

"I'm not satisfied as a person until when I hit the stage having something created that I love -- it has to be exposed to the public," he reveals. "I think what I want is to have the music exposed. I learned that I don't like having me be famous. I like having the music be famous. … I think naturally I don't have that much star quality anyway. … I like being heard. I just don't like being seen."

Included with the album is a lengthy booklet giving insight into Cuomo's creative mind and the inspiration for some of the songs. Because all the tracks are solo takes committed to tape by Cuomo with very little production consideration, the project also gives a never-before-heard glimpse into his creations and evolution at its most spontaneous, unrefined and unsuppressed.

"To me, these recordings suggest this whole world of intimacy and somebody doing something on their own, not because they're a professional artist or a professional engineer. It's just trying to pull all this gear together, in some cases before I had any money, just trying to get my feelings out on tape," he explains. "It's a different thing than somebody who has a ton of money and professional help. This is just one person."

The album also reveals different sides of Cuomo as a musician, breaking him out of the Weezer stereotype and showcasing his more experimental side, including raps, ballads and acoustic fair.

"I'm kind of all over the place. You hear [me] less inhibited, less focused. I think of Weezer, especially the first Weezer record, as being a product of suppression," he notes. "I was really suppressing a lot of my musical instincts and interests. I grew up on heavy metal and on Weezer's first album I really had to consciously suppress a lot of these things."

A prolific songwriter, Cuomo has penned some 800 songs in his career, which he narrowed down to 18 tracks for this project. He's also working on a companion book that will document the '92-'94 period of his life, the two years leading up to the release of Weezer's blue album, which catapulted them to fame based on the success of "Buddy Holly," "Undone – The Sweater Song" and "Say it ain't So."

Cuomo will also reunite with Weezer for a new album due out in April or May of next year, and, as always, you can expect the unexpected from him.

"There are two things I'm doing differently now then the mid-'90s stuff," he explains while pawing over the album's songs on his iTunes. "There's a lot of retrospective feel, looking back on my life, looking back on my childhood and kind of understanding where I came from. And then the other thing I'm doing that I didn't used to do: imagining myself as a completely different character and putting myself in that world and trying to write a song from that point of view. In some cases, it's not really a character I'm comfortable with at all."

Cuomo says his decision to write from an imaginary person's point of view is to help him to once again avoid repeating himself or settling for the norm.

"Well, a lot of the artistic choices I make, looking back, I realized are an aversion to what I've been doing," he notes. "In this case, I have a long history of writing songs from a victim place, an emo guy place, so in the past year or two, I've consciously tried to say 'OK, I'm going to be a really cocky guy and see if I can write a song like that.'"

Look out for Weezer to go cock rock in 2008. But it can't be any less unusual than the rest of their catalogue or Cuomo himself. Can it?