Hyper Extended Midget Tour Show #1: Cricket Arena, Charlotte NC...
...the tour got off to a pretty raucous start! The Cricket Arena wasnt fully packed, but those in attendance were loud and stoked!! They were really cool to Ozma, freaked for Saves the Day, and went ballistic for the weez! This show marked "the return of the amps" for weezer, which gave the sound a crunchy extra flavor and seemed to fuel the overall stoke factor. These folks went a little overboard. First the barricade broke down, forcing a short delay between STD and Weezer while the security dudes shored up the barricade with all these metal pipes. No one was positive that it would hold, and if it hadn't, the police probably would have stopped the show for safety reasons.

Fortunately that didnt happen. What did happen was pretty scary though! Some imaginative (and possibly crazy) fans decided to pull up the floor borads that were covering the ice of the rink, and use them as giant crowd surfing boards. I think this trick was developed during that infamously rough festival Woodstock '99, and no one expected it to surface indoors tonight!! This is some seriously dangerous stuff. I learned the hard way when one of the boards came over the barricade and bashed me in the back of the head in the fog of "Only In Dreams", which made me whack my nose on the videocamera and get a bloody nose and a huge headache...d'oh! (dope nose??) Man, this rock stuff can get rough! 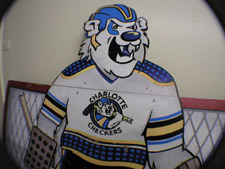 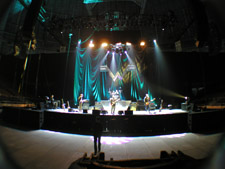 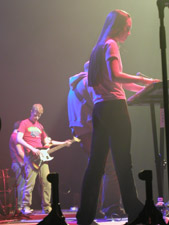 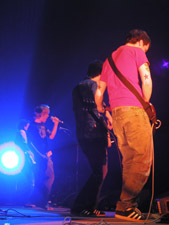 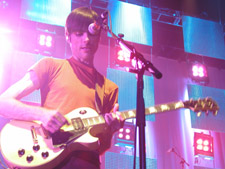 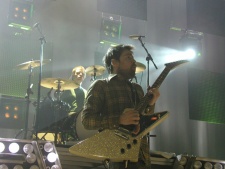 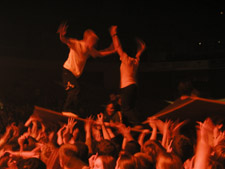 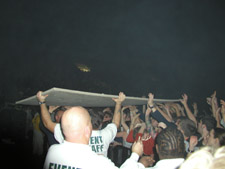 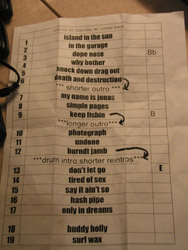