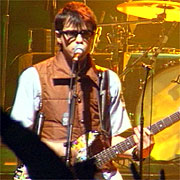 
Video-savvy band hooks up with current clip auteur in L.A.

From the Sonicnet News archive

With their third record, The Green Album, due out next month, Pacific post-punks Weezer tapped director Marcos Siega to shoot the video for their new single, "Hash Pipe."

Weezer and Siega — the man behind Blink 182's "What's My Age Again?" and "All The Small Things," as well as Papa Roach's "Last Resort" and "Broken Home" videos — are slated to wrap the two-day shoot for "Hash Pipe" on Tuesday (April 10) on location in Los Angeles, according to a publicist at the band's label, Interscope Records.

No information was available about the video treatment, although the rep noted the "Hash Pipe" clip would be part performance-based and part concept-based, much like Weezer's videos for "Undone (The Sweater Song)" and "Buddy Holly," the latter of which paid tribute to the '70s TV sitcom "Happy Days."

A single version of "Hash Pipe" has already been shipped to radio; the video isn't expected to premiere until closer to the May 15 release date for The Green Album.

After headlining the Yahoo! Outloud tour earlier this year, Weezer recently decided to bypass an offer to appear on the 2001 Warped Tour in favor of mounting their own summer tour, an itinerary for which is still being hammered out.

In addition to upcoming shows in Japan and the U.K., Weezer have three U.S. dates penciled into the band's spring schedule, including performances at the Coachella Festival in Indio, California, on April 28 and the KDGE Edgefest in Dallas on May 12.