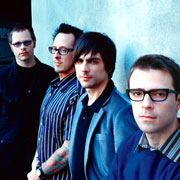 
Make Believe, produced by Rick Rubin, is due May 20.

There's one thing you should know about Weezer's upcoming album, Make Believe, due May 20 — mainly that until very recently it wasn't even finished.

Sure, the disc has been recorded, mixed and mastered, but it wasn't until Wednesday that the band confirmed it had finally settled on a track listing. That being said, doing a song-by-song preview of the album would be pretty difficult, since Geffen Records only let MTV News hear five tracks (including the just-released first single, "Beverly Hills").

Judging by what we heard, though, it's a pretty safe bet that the record will be a welcome addition to the collections of every scrawny Weez-head on the planet ... and a few of their older, construction-working brothers, too.

For every instance of frontman Rivers Cuomo's lyrical self-loathing (and boy, there are a whole lot of 'em) there are at least twice as many moments of crunchy power chords, shouted choruses and truly fret-burning guitar solos.

It's as if Weezer and producer Rick Rubin (and yes, after much rigamarole, he is listed as the album's producer) dug up the masters from the Pinkerton sessions and thought, "You know, all this bare-bones emoting sounds pretty good ... now only if we could get Steve Vai to wail over the top of it."

Take, for example "We Are All on Drugs," on which Cuomo combines the sing-songy pseudo-rapping he perfected on Pinkerton's "El Scorcho" with some truly Def Leppard-esque guitar work and a huge chorus that would make even the biggest '80s enthusiast go "Whoa!"

That the tune has been bandied about as Make Believe's second single seems like a no-brainer, because the whole thing smacks of radio rock, from the way Cuomo raps (at one point rhyming "friends" with "Mercedes Benz") to the way he jerks the chorus into the spotlight, with a guttural "Give it to me now!"

On the flipside is the ballad "Freak Me Out," which sounds a lot like another track on Pinkerton: the tender album-closer "Butterfly." Of course, here it's all bolstered with studio sheen, as Cuomo's tender mentions of "All these problems on my mind" and "city streets at night" float overtop some genuinely pretty headboard notes and a bluesy harmonica line.

Similar in spirit, if not in structure, is "This Is Such a Pity," on which Rubin adds enough new-wave synth squirts and squiggles to disguise the fact that this song is really an unabashed guitar ballad (including a solo that recalls Europe's "The Final Countdown"). It's also likely the first tune in history where Cuomo addresses his many detractors, wailing, "You think I'm a fascist pig!"

Probably the most "Weezer" of the tracks previewed is "Peace," a down-tempo number that combines acoustic jangle with electric snarl. There's lots of familiar "Whoa-oh-oh-ohs" married with the band's near-patented stop-start rhythms and cascading guitar solos. But above the din, Cuomo's voice reaches never-before-achieved heights, nearly cracking as he belts out lines like "I need to find some peace."

Perhaps the only things missing from Make Believe (or at least the songs we heard) are some genuinely groundbreaking moments. It's no secret the Blue Album and Pinkerton were chock-full of jaw-dropping, genre-defining nuggets, and even more recent records like the Green Album and Maladroit had songs like "Hash Pipe" and "Keep Fishin'," which were unexpected curveballs. These preview tunes tended to keep within the basic Weez formula: crunchy chord, shouted chorus, Cuomo guitar solo, repeat.

But who knows. Maybe one, two or all of the rest of the Make Believe tracks will contain those moments that pop your eardrums, make you jump up and down and scream, "Woah-ooh-ohh-ohh!" You'll just have to wait until May 20 to find out.