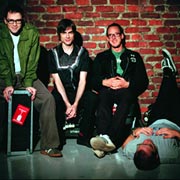 
If you were compiling a list of the places Weezer would feel most out of place, it'd probably go something like this: Jay-Z's 40/40 Club, the Sturgis Motorcycle Rally, the Playboy Mansion.

Well, that list just got a little shorter. The guys in the band faced their fears and chose Hef's home as the location for "Beverly Hills," the first single off their upcoming fifth album. And they even convinced the smoking-jacket-clad man of the house to take part in the fun.

"Today was a long day of work on the 'Beverly Hills' video over at the Playboy Mansion, where the very odd mixture of real Weezer fans, Weezer and Playboy Playmates resulted in a weird, hilarious and oddly unified experience," the band wrote Monday in a post on Weezer.com. "The whole production crew kicked major ass as well, as did the Playmates and a certain swinging patriarch who lent a hand in the proceedings."

The clip, directed by longtime Weezer collaborator Marcos Siega ("Dope Nose," "Hash Pipe"), begins when Hugh Hefner puts a call out to Weezer to have them play at his mansion. The band and a host of honest-to-goodness Weez fans (recruited from the Internet) quickly descend on the place for a whole host of fish-out-of water hijinks, including frontman Rivers Cuomo rocking out in the famous grotto, fans partying in the mansion's zoo, and, according to Weezer.com, the band playing "a rather jaw-dropping round of soccer."

The juxtaposition of Playmates prancing poolside and Weezer fans schlumping around in the mansion's arcade is meant to show the meaning of "Beverly Hills," which is basically about "the sense of alienation that many people get when they don't feel like they belong."

"The song speculates about living the life of movers and shakers but concludes that there's no way to cross over from the 'real world' to the 'fantasy world,' " the post reads. "But for a few minutes the idea is tossed about, taken to the level of longing for a life of extreme celebrity."

Though that may sound like a heavy message, it comes all wrapped up in a sparkly rock-and-roll bow, according to the band.

" 'Beverly Hills' is a pretty catchy track and was practically begging to be a single, but it's important to know that it's but one piece of a fairly complex album pie," the post concludes. "To any concerned that album five is just a collection of 'fun' songs, fear not — there's many flavors to come."

Weezer's fifth album still has no official title, and though there's still no firm release date, it's expected to hit stores in May.