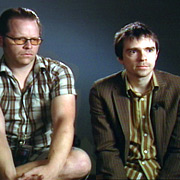 Are Weezer Calling It Quits?


Band says Make Believe could be its final album.

They've been a band for more than 13 years, releasing five albums and winning over an army of overly devoted fans in the process. But all that could soon be a distant memory, because it looks like Weezer might never make another album again.

Last week, MTV News spoke to the band before the launch of its co-headlining tour with the Foo Fighters (see "Weezer, Foos Bring Arena-Rock Spectacle To Foozer (WeeFighters?) Tour Kickoff"), and the guys were more than candid about a whole host of subjects, including the fact that Make Believe could very well be their final LP.