"My Summer Girl" is the sixth track from the Rentals debut album, Return of the Rentals. It is a reworking of a song titled "I Don't Love This, Babe"

Cherielynn Westrich, who co-wrote the song "My Summer Girl" did not initially receive songwriting credit on the album's release. Westrich expressed disdain for Sharp in a 2001 Glorious Noise interview, saying "Matt pretty much tried to take credit for everything that anyone would let him. He changed the album cover from the original design to a picture of just him. I think he even tried to take producer credit all to himself. I really think Matt was being kind of a big jerk to a lot of nice people. Tom [Grimley] really did do quite a lot on that album. Yes, Matt also did take all the writing credit, and all the publishing money that goes along with the writer's credit, although you are right about "My Summer Girl." I wrote the lyrics and melody. Oh well."[1] Westrich later received credit for writing the song on the Rentals' website when the band reformed in 2005. [2] 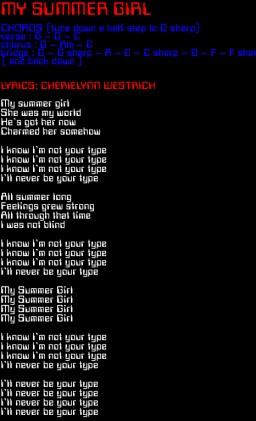 I know I'm not your type
I'll never be your type

I'll never be your type