Nerd Night is a series of events hosted by Rivers Cuomo where he invites fans to join him, either for movie screenings or live theatre (mostly works by William Shakespeare, with the exception of the first two) around Santa Monica/West Los Angeles. The first one was announced on the revamped riverscuomo.com; subsequent Nerd Night announcements have been tweeted out by Rivers via his Twitter account @riverscuomo, usually with a link to his website where one can request tickets. The Nerd Nights have included anywhere from 20-40 fans, where Rivers either rents out a movie theatre for private screenings, or pays for tickets for the entire group.

The first Nerd Night, on June 26, 2011, featured a screening of The NeverEnding Story.

"Come watch “The NeverEnding Story” with me at a theater in Santa Monica on Sunday, June 26. (It’s a private screening.) If you would like to attend, please send an email with your full name and contact information (email, phone number, city in which you reside), and we’ll send invitations with more details to 40 of you (plus 1 guest each)."

The second Nerd Night, on September 25, 2011 featured a screening of Time Bandits.

Related to the Nerd Nights, Rivers made an announcement for a "Dork Day I", where he invited fans to bring their children for a family friendly production of Shakespeare's Midsummer Night's Dream, put on by Theatre For a Small Space. Though he called it Dork Day I, there has only been one Dork Day to date.

The eleventh Nerd Night, on June 15, 2015, was especially unique as Brian Bell showed up after the screening of Antony & Cleopatra to join Rivers in playing an acoustic version of "Cleopatra", the ninth track off of EWBAITE, for the fans. They even donned Roman-style helmets for the occasion. Also, since this Nerd Night was just after Rivers' birthday, fans celebrated by bringing him a cake and presents; and one fan even made Cleopatra-themed cupcakes. 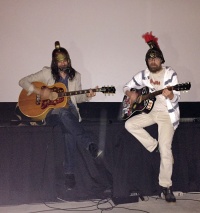 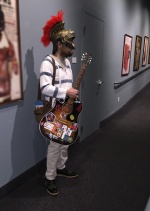