EXCITEMENT, KIDS. I recently had the opportunity to conduct an e-interview with Karl Koch - webmaster, archivist, and close friend of the band Weezer - about the newly-released Weezer Deluxe Edition. The Deluxe Edition includes both the rock masterwork of the album known as "Blue" and a rad selection of previously unofficially-released excellent Weezer songs. But I'm not biased on behalf of the band or anything. Yeah, so I went out and bought my copy the day it was released. You can stop laughing now. No, really. 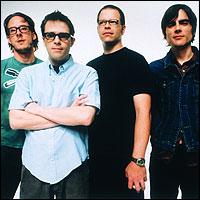 Plasma Rag: When did the idea of re-releasing Weezer with added tracks come about?

Karl: About last fall - I think in September the idea came up.

PR: Who suggested it?

Karl: Actually, it was offered by the Universal Music Group, who have been doing those Deluxe Editions for a couple years now. They did Sonic Youth's Dirty and were looking for other "classic" 90s albums to do.

PR: What was the band's initial reaction?

Karl: Generally positive, but Rivers was skeptical at first. He has always been one to consider past works "finished", and not something that can be altered. I think that once he learned that Disc 1 would be the same, just remastered, he was fine.

Karl: I thought it was a great idea, better than doing a "Greatest Hits" or "B-Sides" album, because it allowed a re-examining of a specific era - not a catch-all with all sorts of random stuff thrown in.

PR: How were the tracks for Disc 2 chosen?

Karl: Basically by listening. The b-sides were pretty much a shoo-in and then a lot of demos were listened to and the ones that sounded the best were chosen. The idea was to create a collection that could stand the test of time, as opposed to a catch-all "box set" that has every little thing. Though I personally did push for including a few more old demos that I liked. But that didn't go over so good, heh heh . . . (Here I snorted.)

PR: How was the track order for Disc 2 decided?

Karl: Todd Sullivan (the band's A&R guy) worked with the ordering, and the band and I chimed in with our suggestions.

PR: How long did production take?

Karl: A few months. I was mostly involved with the uncovering of old photos and archive stuff, working with the art team to get it right, as I was able to I. D. the correct photos and stuff, and writing the info about the Disc 2 songs. Todd made sure the discs sounded as good as they could, and wrote a cool story of his signing of the band. Once the pressing plant has the art proofs, it all comes together really fast.

PR: Was the band very involved with the process, and if so, which parts?

Karl: Well, originally, Pat helped discern which old demos were too rough sounding to be included. Mostly the band checked everything out, and approved or offered suggestions as we went along.

PR: What was Weezer's artistic purpose in The Blue Album the first time around?

PR: Do you foresee the re-release of other classic Weezer albums (such as Pinkerton) in the future?

Karl: Very hard to tell, though I see Pinkerton as being an album that could work for, and very deserving of it.