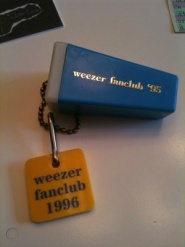 The "Secret Surprises" were small trinkets given annually to members of the Weezer Fan Club in the 90s. They were designed by fan club founders, Mykel and Carli Allan.